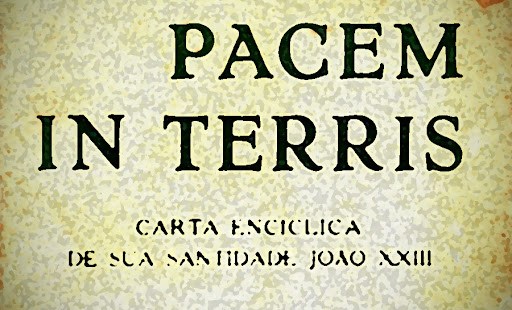 The encyclical “Pacem in Terris,” written by Pope John XXIII and addressed to all people of good will fifty years ago, is experiencing a “second childhood” in Japan.

50 years after its publication, the encyclical "Pacem in Terris," which Pope John XXIII addressed to the Church and all people of good will, is very modern and is experiencing a "second childhood" in Japan.

As reported by Fides sources in the Japanese Church, a new translation of the text, prepared by the Episcopal Commission for social issues is circulating in dioceses, associations, movements and communities, arousing great interest even among non- Christians.

"The encyclical sends a strong message to modern society even after 50 years. Its message is considered a cornerstone in order to build peace in the world and is a starting point for useful reflection in the Year of Faith," explains, in a note sent to Fides, His Exc. Mgr. Peter Takeo Okada, Archbishop of Tokyo and President of the Bishops' Conference of Japan.

The text, explains the Archbishop, receives strong attention throughout Japanese society because it offers teachings on the rights and responsibilities of men, on state authority and on the common good, and because it touches topics such as truth, justice, solidarity, disarmament and economic development.

"The encyclical teaches that peace can only be achieved when a society allows each person to live their life to the full, in a fully human way. This truth questions the development model of any modern country, including Japan," remarked the Archbishop.

Mgr. Okada, 50 years after the encyclical, recalls a debate that Japanese society today is experiencing: the proposal of the change of art. 9 of the Constitution, which states that the country cannot have an offensive army but only "troops for self-defense."

For the Bishops, "art. 9 is a treasure of which Japan is proud. It reflects the teaching of Jesus Christ about love. Thanks to this approach, Japan has never killed anyone during war and no Japanese citizen lost his/her life in a conflict. It is our fundamental responsibility to protect this article and do everything possible to preserve it," says the Archbishop.