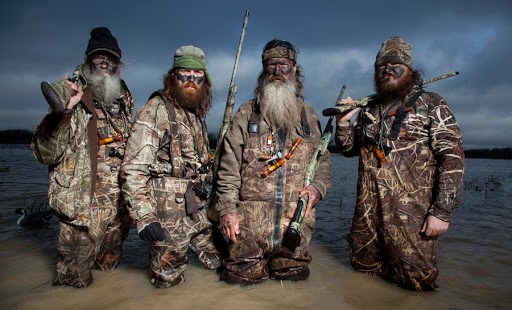 Duck Dynasty is one of the most popular shows on TV, now holding several ratings records – and yet it’s totally family friendly, even ending each episode with the show’s stars praying together.

With 11.8 million viewers for its fourth season premiere this last summer, it holds the record for the most viewers of a non-fiction cable TV show ever, breaking the previous record by 2 million. During that episode, the show inspired a whopping six trending topics on Twitter. In all, its producers say the episode claimed 53% of the share of TV commentary on all social media that night. Have you caught Duck Dynasty fever?

Ducky Dynasty takes you behind the scenes with a "redneck" millionarie family. The source of their fortune is the "Duck Commander", a duck call created in 1972 by the father of the family, Phil Robertson. His son Willie is now the CEO of the company. If you haven't seen the show, you'd still probably recognize its main characters: the men's long beards and outdoorsy wardrobe have become iconic.

What's the secret to its success? Compared to most of what's on TV, but especially compared to other reality TV shows, Duck Dynasty is clean, family fun – even more so than it appeared to be early on. Phil Robertson recently explained that bleep-outs in earlier seasons were fake: they weren't actually swearing, but the show's producers thought adding the illusion that they were would make the show more interesting. When he realized this, Phil confronted the producers, who subsequently stopped adding the fake bleep-outs.

The producers obviously didn't understand the strengths of their own show. "Duck Dynasty is the only show on TV that I know I can let my children watch without me there," says Austin Ruse, president of the Catholic Family and Human Rights Institute. "That is why it is so popular with many parents. There's no lewd humor, no promotion of homosexuality, no promotion of anything that offends our sensibilities."

Professor of Philosophy Ronda Chervin says she's benefited from the inside look of a part of American culture from which she's been largely unconnected. "Coming from NYC, this show got me to appreciate my son-in-law and also a certain type of masculine personality totally different from most of the Catholic late vocations seminarians I work with or the NYC Jewish businessmen I grew up around!"

Phil Robertson also revealed recently that, while the family always ended their prayers "in the name of Jesus", the producers edited out that line of their prayers in early seasons since they thought it could be off-putting. As with the fake bleep-outs, the producer's stopped ending out the line when Phil asked them about it.

That the show's producers would think to do that at all is revealing of the state of American culture, but given how secular TV is normally, Chervin says she didn't notice. "Laughing through the shows, I then find myself touched that they wind up praying together at the dining table. Instead of looking at what might be missing in the prayers, I am thrilled that anyone is praying on such a popular show."

The following Aleteia Experts contributed to this story:

Ronda Chervin is a Professor of Philosophy at Holy Apostles College and Seminary.

Austin Ruse is president of the Catholic Family and Human Rights Institute (C-FAM).