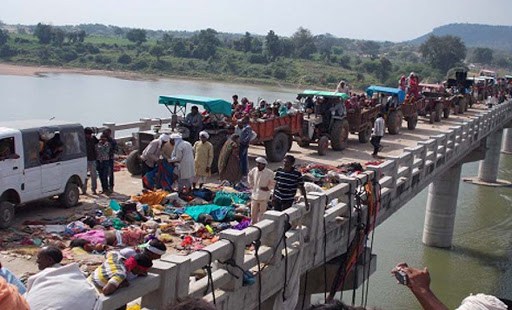 At least 117 pilgrims were killed and 100 injured in a bridge stampede on the last day of a Hindu festival in central India on Sunday.

The tragedy occurred after people reportedly panicked on their way to the famous Ratangarh Mata temple on the ninth day of the Durga festival as rumors spread that the bridge over the Sindh River in Madhaya Pradesh was about to collapse. About a quarter of a million people were reported to have gathered around the temple.

The death toll was expected to rise further as people were still missing on Monday, officials said, while some families were understood to have taken bodies away to avoid red tape.

Authorities said that search and rescue operations had ended as families continued to look for missing loved ones around the site of the tragedy.

Mangal Kishore, who lost his two-year-old son and whose wife was hospitalized, blamed the local government for failing to take suitable measures to manage the large crowds.

"She [my wife] went to seek blessing for our son, and we lost him," he said.

Chief Secretary Anthony De Sa, the state's highest ranking civil servant, said that there would be an investigation into the stampede, a common occurrence at religious festivals in India where authorities have routinely faced accusations of failing to properly manage large crowds.

The Sindh River bridge was only recently rebuilt after water was released from a nearby dam without warning, killing 49 people during the same festival in 2006.

Originally published at UCAnews on 14 October 2013. Used with permission. All other rights reserved.