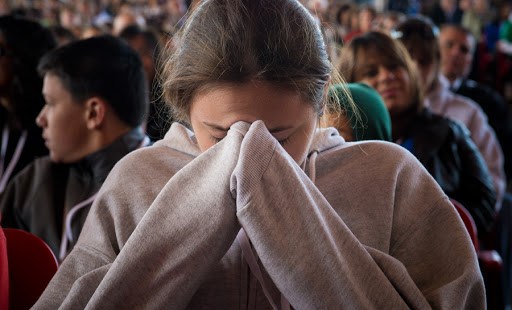 At the Christian Service 4 Life event in California, Archbishop Gomez encouraged thousands of teens to deepen their respect for all human life as an example to society.

Los Angeles Archbishop José H. Gomez encouraged a gathering of thousands of teens to deepen their respect for all human life and to show society how to reach out in love and compassion to all those in need.

“Our job as Christians is to show our society a new way. A way of love. A way of welcoming and hospitality,” he said Oct. 9.

He stressed the need to defend “the sanctity and the dignity of all human life – from conception, through life until natural death.”

“We need to reach out to everyone with the helping hand of Jesus Christ – from the woman expecting a child to the handicapped and the aged. We need to be people of mercy and understanding – welcoming to everyone.”

The archbishop spoke to an audience of more than 5,000 Catholic junior high and high school students at the “Christian Service 4 Life” event at the StubHub Center at California State University, Dominguez Hills in Carson, Calif.

The event, which took place during the Church’s Respect Life Month, was co-sponsored by Life SoCal, a pro-life group in southern California. Other speakers included actor Eduardo Verastegui and 2011 Miss Delaware, Maria Cahill. Leaders of community organizations talked to the students about how to help the poor, the elderly, the disabled, and pregnant women and their unborn children.

Archbishop Gomez lamented the loss of respect for life in the culture, evident in the problems of abortion, euthanasia, street violence, domestic violence, the neglect of the old and the sick, and other forms of indifference to suffering.

He encouraged the students to ask what Jesus wants from them and to be “a voice for the people God loves.”

“Our God loves and cares for every one he has created – especially the innocent and defenseless, those who can’t take care of themselves,” he said. “Especially those lives that are weak and fragile, ‘inconvenient’ or a burden to others – the child in the womb, the sick and the handicapped, the elderly.”

Action to protect the vulnerable is part of the Christian mission in the world, the archbishop explained.

“My young friends, Jesus needs you! The Church needs you and our society needs you! We need your energy, your enthusiasm and your hope. You are the future!” he said, citing Pope Francis’ words of encouragement at World Youth Day in Brazil.

Archbishop Gomez said that Jesus Christ is calling each person to be “disciples” and “missionaries” who will “go and serve others” and tell others about him.

“My young friends, Jesus is calling us to be saints! And you are never too young to answer that calling!”

The archbishop recounted the story of St. David Roldán Lara, a Mexican 19-year-old who was martyred in the anti-Catholic persecutions in Mexico in the early 20th century.

The young man worked peacefully to resist the persecution, but was arrested with his friends and his parish priest. He was “smiling and joyful” even in the days before his execution by firing squad.

Archbishop Gomez described the teenage saint as a model for youth.

“So let’s go be Christian servants for life! Go to Jesus and serve him by your love and compassion for others. Serve him by your witness to the Gospel of life!” he urged, asking the Virgin Mary to help Catholics “build the culture of life in our time.”