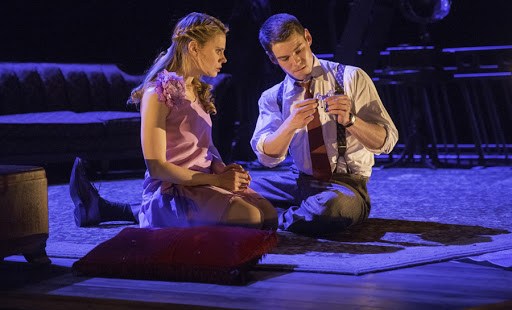 John Tiffany brings to the stage a hauntingly brilliant rendition of this Tennessee Williams classic.

The year is 1944 and there’s social upheaval throughout the world. Otherwise peaceful cities in the United States, such as St. Louis, Cleveland and Chicago, are witnessing violent protests over labor disputes.  The real unrest at present, however, takes place in the Wingfield home, the setting of the classic Tennessee Williams play, The Glass Menagerie, which is currently being revived this season on Broadway.

For a few moments halfway through the second act, it’s possible to imagine that life might finally be improving for the Wingfield’s, the small St. Louis family of three that is the intense focus of this play. At the request of his mother, Tom has invited his shoe factory coworker, Jim O’Connor, over to join the family dinner. Tom’s mother, Amanda, has held high hopes for this evening and has convinced herself that Jim will surely be interested in her twenty-three year old daughter, Laura. In fact, that’s all Amanda really wants these days is for someone to marry Laura who has been physically crippled since birth, though as she’s grown older, the real crippling has been her social anxiety resulting from the enormous pressure of her mother. Laura escapes this by living in a world of fantasy, obsessed with her collection of glass animal figurines. Amanda, who was once the receiver of many gentlemen callers, is preoccupied with finding someone—anyone, really—that might care for her Laura.

When Jim arrives for dinner, Amanda forces Laura to answer the door, but she spends the rest of the evening recovering in the living room, calming herself and hiding from Jim. Desperate for the evening to be a success, Amanda regales Jim with embellished accounts of her own days as a young woman, but while preparing the dessert course, she ushers Jim into the room with Laura in one final attempt to play matchmaker.

And then something strange happens. Jim immediately discovers in Laura a project. The aspiring business executive within him allows him to tell her she’s not so different after all. They humor one another with stories from high school. They kiss. They dance. Yet, as they’re dancing, Laura’s favorite glass figurine, a unicorn, is knocked unto the ground and the horn breaks off. In that moment, both the dreams of Laura and Amanda are shattered, and Jim realizes that he’s danced too dangerously with the Wingfield’s.

Indeed, all will never be well for the Wingfield family. Amanda is forever haunted by the absence of her husband who abandoned the family and headed west, leaving her to care and provide for her children alone. Laura’s world of glass figures distract her thoughts, but she, too, is ever aware that her world is mostly delusional. And Tom will never shake the pressure of his mother to make something of his life and his sister’s disabilities, which he can neither help nor forget. This is a show about inadequacy and fear and while it takes place inside the Wingfield home throughout the play, the audience cannot help but become trapped in the tension.

Under the inspired direction of John Tiffany (Once), this Broadway revival has set such a high standard, it’s hard to imagine any future productions of the season measuring up to it. Perfectly cast, all three members of the family trio deliver Tony worthy performances.

Amanda Wingfield is one of the great female roles in American theatre and Cherry Jones was born to play this role. Jones delivers a pitch perfect portrayal of a desperate mother still reeling from a complicated past and afraid for her future. Though it may seem that she is seconds away from a major breakdown, one cannot help but feel sympathetic to Jones’s Amanda. She is utterly annoying, yet wonderfully human.

Zachary Quinto offers a stirring performance as Tom, a young man desperate to escape his family, yet forever tied to his sister in ways he does not even understand. As both a character and the show’s narrator, it is in his memory that the events of the show take place. Quinto’s captive interpretation ensures that it will remain in ours as well.

Celia Keenan-Bolger is a tragically beautiful Laura, rendering her idiosyncrasies forgivable and her emotional fragility defensible. Quinto and Kennan-Bolger pair well together as siblings who unite in solidarity to survive life in their mother’s household. While Tom does so with aggression, and Laura through submission, both Quinto and Kennan-Bolger offer wholly believable performances.

Brian J. Smith rounds out the cast as the smooth talking Jim O’Connor, a role that could be easily lost or understated given the large performances of the family trio. Yet, Smith impressively holds his own and strikes a balance as a likeable young man who’s simply prone to committing more than he can deliver.

From the outset Tom warns the audience that this show is memory play, hence the stage will be dimly lit. Natasha Katz’s brilliant lighting design, enhanced by Bob Crowley’s masterful scenic design, completes this production with the use of fog and water to enhance the dreamlike quality of the show. Both Katz and Crowley worked with Mr. Tiffany on his 2012 hit musical, Once, and all three garnered Tony Awards for their work.

This limited run of The Glass Menagerie hits all the right notes and is a production not to be missed by both serious theatregoers and first-timers alike. While the play is told from the haunted memory of Tom, by show’s end, be prepared to discover that the haunting has just begun.