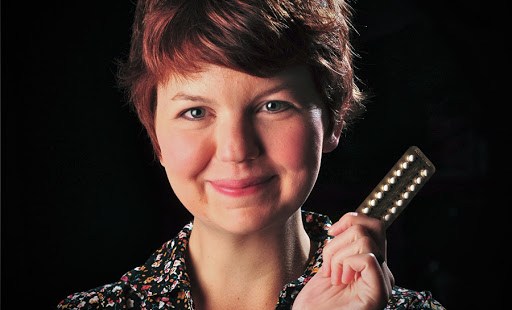 A young woman dissolves the sugar coating on the contraceptive pill and exposes its harmful, anti-woman core.

Holly Grigg-Spall is a young woman who calls herself a feminist but who is deeply unpopular with some of the sisterhood right now. English, 30-ish, married to an American and living in California, she has written a book criticising the contraceptive pill. Actually, Sweetening the Pill: Or How We Got Hooked On Hormonal Birth Control is more than critical; it is a sweeping polemic against the pill and every form of hormonal contraception. Since this wonder drug is celebrated by mainstream feminists (Nancy Pelosi, Cecile Richards, Sandra Fluke…) as the great liberator of women, you can see why the others are peeved with her.

And yet, Ms. Grigg-Spall (pictured above) has so much in common with the pill’s diehard champions. Like Ms. Fluke, she grew to adulthood thinking that taking this medicine daily was as natural as having toast for breakfast. Like Ms. Pelosi and Ms. Richards, she thinks contraception is a reproductive right. (No, she is not from what she calls “the religious Right.”) But, although once “hooked” on them, she has fallen out of love with synthetic hormones and wants everyone to know why.

In her mid-20s, when she should have been feeling on top of the world, Holly Grigg-Spall was feeling depressed and empty, ho-hum about sex. And that was when she was not feeling anxious and paranoid or erupting into furious arguments with her boyfriend. “I felt I was losing my mind,” she says.

She had been on the pill since she was 17, when her mother and family doctor told her it would solve the problem of heavy and painful periods as well as protect her against pregnancy. She did not yet have a boyfriend and would not become sexually active for another four years, but she accepted their view that it was the responsible thing to do. She knew nothing about how the pill worked – other than stopping babies arriving – and did not think to ask.

Ten years later, in 2008, she was still largely ignorant about what was going on in her body. She had been dutifully swallowing the pill in various forms and was currently on Yasmin (or Yaz), at her own request, having been impressed by Bayer’s aggressive advertising campaign for this “lifestyle” drug that cleared up acne and prevented side effects such as the weight gain often associated with the pill. A conversation with a friend, however, made her suspect it was this drug that was causing her mood swings and ruining her life.

She started to read health feminist literature and ask questions. Gradually overcoming her fear – no, terror – of becoming pregnant, she abandoned the pill altogether and relied on non-hormonal methods of contraception. Reports of women on Yasmin experiencing and even dying from blood clots, Federal Drug Administration action against Bayer in 2009 and mounting lawsuits against the company for its failure to inform users properly about its risks provided the impetus to turn Grigg-Spall into a crusader. By then she had moved with her husband to the US where she launched a blog about her experience, attracting stories from other pill refugees.

In May 2010 when the 50th anniversary of the pill’s launching was being celebrated by economists, health professionals, population controllers and feminists alike, she gained a sympathetic hearing from some of the mainstream media with a piece in the UK Independent, an interview on BBC radio and respectful mentions in the London Times and the Washington Post. She has guest blogged on the feminist sites Ms Magazine and Bitch.

With the publication of her book, however, that attention has changed to annoyance and disdain. “Sweetening the Pill offers an insultingly reductive account of what it means to be female,” fumes