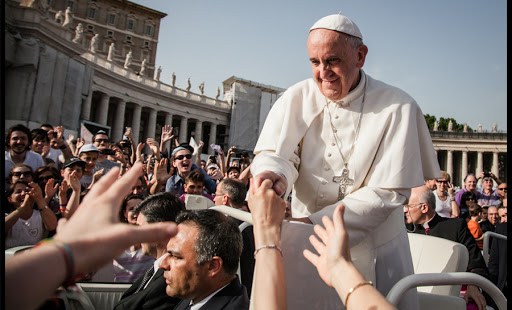 Sunday Angelus in Rome with the Holy Father

Pope Francis in his Sunday Angelus greeting taught that prayer is a ‘weapon’ in the struggle against evil.

“Above all, persevering prayer is an expression of faith in a God who calls us to fight with him, every day, every moment, to overcome evil with good,” Pope Francis said Oct. 20 to an enthusiastic crowd in St. Peter’s Square.

We do not pray to convince God “by the force of our words,” he said.

“He knows what we need better than we do!”

The Pope explained that Christians’ strength in prayer comes from God alone.

“In our daily journey, especially in difficulties, in the struggle against evil outside of ourselves and within us, the Lord is not far way, he is at our side; we fight with him beside us, and our weapon is prayer, which makes us feel his presence alongside of us, his mercy, even his help,” Pope Francis said.

The Pope acknowledged the “”struggle to carry on every day,” adding “God is our ally, faith in him is our strength, and prayer is the expression of this faith.”

“If the faith goes out, if prayer goes out, and we walk in the darkness, we will be lost on the journey of life,” he added.

The Pope reflected on Sunday’s gospel story of the “persistent widow” who refused to give up asking a judge to render a just verdict. At the end, she convinces him to grant her justice.

“We can therefore learn from this widow in the gospel,” said Pope Francis. “She was good, this widow.  She knew to fight for her children.”

“I think of the many women who struggle for their families, who pray, who never grow tired. Let us remember today, all of us, these women who with their approach give us a true witness of faith, of courage, of a model of prayer. Let us remember them!” he exclaimed to the crowds who cheered in response.

Marking the celebration of World Mission Sunday, Pope Francis then turned to particular examples of “those missionaries who work without making noise, and who give their lives.”

One such missionary was the Italian woman Afra Martinelli, who worked for many years in Nigeria.

Pope Francis recounted: “one day she was killed in a robbery; everyone wept, Christians and Muslims. They really loved her!”

“She announced the Gospel with her life, with the works she accomplished, a center of instruction; in this way she spread the flame of faith, she fought the good fight,” he continued. “Let us think about this our sister, and greet her with applause, all of us!”

The pontiff also spoke of the life of Stefano Sandor, a lay Salesian who was beatified Saturday in Budapest.

Pope Francis said Sandor was “exemplary in service to young people, in the oratory and in professional instruction.” The Hungarian confronted the Communist persecution of Catholics “with courage” and was killed at the age of 39.

Pope Francis also took a moment to remember the people of the Philippines who suffered from a 7.1-magnitude earthquake on Oct. 15. The earthquake killed over 150 people and affected nearly 3.5 million others.

“I invite you to pray for that dear nation, which in recent days has suffered different calamities,” he requested.

The Pope concluded by greeting the various groups present, including those who had gathered for a 100-meter “race for faith” held by the Pontifical Council for Culture.

He had special words for visitors from his homeland Argentina, which celebrates Mother’s Day today.

“I offer an affectionate greeting to the mothers of my land!” he said with a smile.

Originally published on Catholic News Agency on 20 October 2013. Used with permission. All other rights reserved.