Pope: Mary is United to Christ in the ‘Martyrdom’ of Her Heart 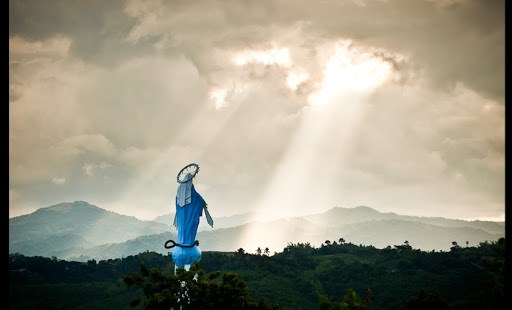 In his weekly general audience, the Pope continued his catechesis on the Church, reflecting today on the importance of Mary as an example of how to respond to God’s plan with fidelity.

In his weekly general audience, the Pope continued his catechesis on the Church, reflecting today on the importance of Mary as an example of how to respond to God’s plan with fidelity.

“She is also a model of union with Christ, be it in her daily duties, be it in the way of the Cross, until she unites herself with Him in the martyrdom of the heart.”

Pope Francis directed the words of his Oct. 23 general audience to the nearly 100,000 pilgrims gathered in Saint Peter’s Square.

“Dear Brothers and Sisters: In our continuing catechesis on the Church, we now look to the Virgin Mary who, as the Second Vatican Council reminds us, is ‘the model of the Church in the order of faith, charity and perfect union with Christ,’” the Pope stated, quoting Vatican Council document “Lumen Gentium.”

“As a daughter of Israel,” noted the pontiff, “Mary responded in faith to God’s call and became the Mother of his Son.”

Because of her response, he urged, “She teaches us to live a life of faith by her obedience to God’s will and by her unfailing devotion to Jesus and his work.”

Mary obeyed, the Pope recalled, as an “ordinary, humble woman” who “lives immersed in the mystery and her yes, already perfect from the beginning, grows until the Cross, in which her maternity embraces everyone.”

“She is a model of charity, the perfect joy that comes from the Spirit and manifests itself in a sacrificial love.”

This charity, reflected the pontiff, has been “born of faith,” and “brings the joy and peace of Christ’s presence to others and to our world.”

The Pope then turned his reflections to Mary’s constant spiritual attitude and disposition, urging that she “models the Church’s union with Christ through her constant prayer and participation in the mysteries of his life, death and resurrection.”

He then questioned those present, asking them “How does the figure of Mary challenge us? Do we see her far away from us? Do we go to her during trials? Are we capable, like her, of loving by giving ourselves completely? Do we feel united to Jesus, according to her example, in a steadfast relationship or do we only remember Him in times of need?”

“As Mother of the Church,” stressed the Pope, “may Mary, by her prayers, bring us ever closer to the Lord.”

Pope Francis concluded his reflections by praying that Mary “open our hearts to share his transforming and redeeming love, and inspire us to put our firm faith in God’s word, trusting in his goodness and his gracious plan for us and for our world.”

Present among those in attendance at this morning’s audience were pilgrims from England, Ireland, Denmark, Norway, the Netherlands, India, Japan, the Philippines, Thailand, Guam, Canada and the United States.

The pontiff extended special greetings to the members of the United Kingdom’s All-Party Parliamentary Group on the Holy See, who will be holding meetings in the upcoming days.