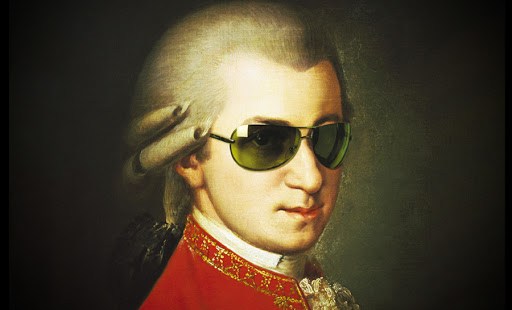 Most people are exposed to famous classical works not in concert halls, but through advertising. Try listening to some of these masterpieces on their own terms, and you may find new meaning in those familiar strains.

Before becoming a “really big ad” for the Australian lager Carlton Draught, “O Fortuna” was the opening movement of Carl Orff’s larger-than-life cantata, Carmina Burana. Composed in 1936, Orff’s signature work took a selection of twenty-four poems from the 12th century manuscript of the same name. The texts, which are largely raucous, bawdy, and satirical in nature, focus around the central theme of fate (personified as “Fortune”) and the various ways in which it impacts our human existence: dramatic highs and lows, successes and failures, placidity and upheaval. This movement, which also concludes Orff’s work, is a reminder that fate is the mistress that encloses all of these life experiences. It is, in a sense, the Christian understanding of Christ as the Alpha and Omega put in pagan terms. (The texts were, in fact, written by a group of mischievous clerics-in-training known as the Goliards, but that – and whatever rich theological debate might be born from it – is a discussion for another day, perhaps best served with a hearty pint.)

The point is, the effectiveness of these ads lies in the effectiveness of the music they employ. Now, I am not going to make an argument against the use of classical music in modern marketing; to the contrary, it presents this music to a large (dare I say, unsuspecting?) audience and makes it go viral. If it’s a mechanism by which the musical art form can be pumped into mainstream culture, fine by me. However, one cannot expect to leave the music to the devices of marketing professionals and consider the work of cultural dissemination complete – especially not when the they fiddle around with the text:

As you can see, this ad is “freaking huge” – or, put another way, of epic proportions. And while vast, open spaces and thousands of extras go a long way in creating that image, the music is also a key element. Classical music engages the inner stirrings of the soul in ways that most types of pop music cannot – and, in particular, it appeals to that part of the human person that can intellectually grasp the supernatural or the abstract, or even those things pertaining to the nearly unfathomable extremes of the natural world.

Such is “O Fortuna” – after all, it does concern that fate by which the world turns and by which human life is unraveled. Not exactly a small matter, is it? And, just as Fortune’s course is mysterious and ever-undulating, so is the music: a bombastic yet dreadful opening that gives way to a suspenseful litany evoking the uncertainty of fate (and the pounding of the heart in the face of this insecurity). That dread of the unknown returns as the music unexpectedly crescendos to a thunderous roar (gongs and all), and concludes with an ironic twist: as the voices sing “mecum omnes plangite” (“everyone weep with me”), the orchestra goes into a celebratory frenzy. Perhaps it signifies Fortune’s victory over man (she is bit of a tyrant, after all), or perhaps it is man’s victory over unpredictable Fortune, eked out at the last minute. Either way, it all makes for a rather spectacular display:

Music is all around us, and its capacity to speak to the innermost depths of the soul makes it a powerful force. It is for this reason that the Catholic Church has long been a patron of the arts, commissioning the highest caliber of works in visual, architectural, and musical art in order to create a setting reminiscent of Heaven and a form of worship that is as worthy as humanly possible in praise of the Almighty. In a secular context, it is also the reason why many marketing teams have successfully employed classical music in their ads.

But, as in the case of the Carlton ad, one can only glean so much from experiencing art in a repurposed way. Sure, we know this piece is “big,” but we don’t know why. Fortune has been dethroned to make way for a lager (that’s a gutsy move, Carlton), and the experience is such that the viewer is conditioned to think about beer rather than fate’s spinning wheel. But even so, this sort of exposure to musical art is not to be considered a cultural defeat, but a rather a catalyst.

Say you have no idea what that piece in the ad happens to be. No matter – if the music was stirring enough to serve as a convincing auditory backdrop for thousands of thirsty men barreling towards each other in response to a pseudo-battle cry (and moreover, if you find yourself suddenly desiring a tall, frosty one), why not experience the music itself, free of repurposing appurtenances? Heck, if it will cost you $72 for an Upper Concourse ticket to go see Miley Cyrus twerk (and these are the cheapest tickets for that concert, mind you), why not pay as little as $15 to hear the San Francisco Symphony perform Beethoven, Mozart, and Copland? Or even just buy a CD or an iTunes album to enjoy at your leisure?

Perhaps it’s time we start listening to music with greater intent, and to let it speak for itself. You’d be surprised by what it can do.

Alberto González is the Associate Editor for Aleteia’s English edition and a professional organist and vocalist in the Washington, D.C. metropolitan area.