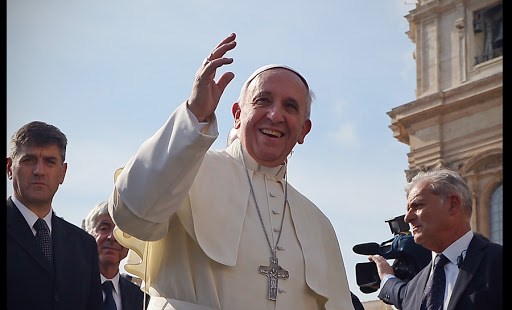 After his meeting with the President of Equatorial Guinea, the Holy Father sends his greetings to the Aleteia team

Aleteia’s own Chiara Santomiero had the opportunity to personally greet Pope Francis while covering a diplomatic visit at the Vatican. The Holy Father graciously sent us his heartfelt greeting, which we are most happy to share with our readership.

Thank you, Your Holiness! May God continue to bless and sustain you in the work of shepherding the Church.

“Your Holiness, can I bring your greetings to my colleagues?”

There were only a few seconds to shake hands with Pope Francis at the end of the official visit of the President of Equatorial Guinea, Teodoro Obiang Nguema Mabasogo, on October 25. The group of reporters who followed the meeting were in line for a quick greeting to the Pope, who still had a packed day of commitments ahead of him. The deputy director of the Vatican press office, Angelo Scelzo, told the Pope that I am a member of the Aleteia team. The Holy Father, with his usual welcoming smile, replied, “A big hello to you all!”

Francis’s friendliness warmed up the meeting that had just ended with small gestures of attention: he left the library to meet the President of Equatorial Guinea at the threshold, speaking in Spanish with expressions of welcome that we gathered from Nguema Mabasogo’s response: “Muchas gracias.” At the end of the private interview, he personally greeted each member of the large delegation that accompanied the President, including many women, giving each one a rosary with his coat of arms and his motto, “Miserando atque eligendo.” There were rosaries with white beads for the women and black beads for the men. He marked Nguema Mabasogo’s wife with a small sign of the cross on her forehead.

The Pope’s welcoming manner softened the solemn setting of the official visit by a head of state, which started from the Courtyard of St. Damaso with the Swiss Guards rigidly lined up for the greeting of welcome: the red, blue, and gold uniforms of the sixteenth-century uniforms (which, contrary to popular opinion, were not designed by Michelangelo) contrasts with the gray and black of the gentlemen from the Pontifical Household. It is the latter who act as an escort to the distinguished guests, accompanied by the Prefect of the Pontifical Household, Archbishop Georg Gänswein, leading the way to the loggia of the Apostolic Palace and the library.

The frescoes of Raphael and his school in the Vatican loggias welcome visitors with a magnificence of blue and gold. It is hard not to be impressed by the show, even for those who come to these places on a daily basis. One such individual is the Dean of the Hall, who admits that he is not used to them yet and that, especially when there are guests and there is silence, he gets the feeling of having gone back through the centuries. In the succession of rooms that lead to the papal library, on the one hand, visitors can see the sedia gestatoria – a portable throne which the popes once used to be raised above a crowd.

Equatorial Guinea is one of the smallest countries in continental Africa in terms of land area, and it is the smallest by population: it only extends to about 28,000 square kilometers and has a population of less than 700,000 inhabitants, according to the UN estimates of 2009. The population is just over one million, according to the government census of 2001. The current president has been in office since 1979, when he sacked the previous dictator – his uncle – with a coup d’état. The discovery of large oil fields in 1995 has changed the economic structure of the country, but not the deep social inequalities. One can bet that despite the brevity of the interview, Francis would not have failed to recommend to the President to take care of the poor of his country, safeguarding their dignity and hope for the future.

After the meeting, which was immortalized by photographers’ flashes, there was the usual exchange of gifts: Nguema Mabasogo brought the Pope a bronze sculpture and ebony figurines made in the traditional style of his country, representing people engaged in various trades. Francis responded with an engraving of St. Peter's Square and the medal of the first year of his pontificate. It appears that it is a “defective” piece that was coined and then withdrawn because on the back, instead of the letter “J” for Jesus (which is part of the sentence of the Venerable Bede from which Francis drew his motto), the letter “L” had been mistakenly engraved. There are only four copies of the “defective” medals to arouse the fury of collectors. It certainly shows Francis’s sobriety that he used the already minted copies and also gave them away generously, not just to a few lucky buyers.