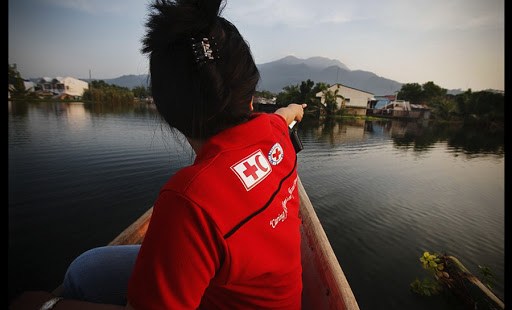 The IFRC launches an emergency appeal to enable the Philippine Red Cross to deliver emergency assistance to those affected by last week’s damaging earthquake.

The International Federation of Red Cross and Red Crescent Societies (IFRC) on Wednesday launched an emergency appeal for US$5.77 million to help deliver emergency assistance to people affected by last week’s 7.2-magnitude earthquake on the central island of Bohol.

The IFRC appeal will enable the Philippine Red Cross to provide safe water, tents, shelter and hygiene kits as well as other essential supplies to help 50,000 people, said Bernd Schell, head of the IFRC office in Manila.

“People are still in evacuation centers with thousands more sleeping outside, afraid to go home because of aftershocks and damage to their homes,” said Schell. “Our assessments show that most of the damaged houses are beyond repair. This means that more than 175,000 people will need emergency shelter and other substantial support in the coming weeks and months.”

Eduardo del Rosario of the Office of Civil Defense said that the flow of initial relief supplies had reached all areas affected by the October 15 earthquake including the epicenter on Bohol and neighboring Cebu province. But maintaining the flow of aid to the 1.3 million people affected has been difficult, he told a press briefing in Manila.

"Our problem is how to bring the relief goods… from other cities to Bohol province," he said, adding that all available aircraft and ships are being used to transport goods.

Tootsie Escobia, spokesperson of the Bohol provincial government, said there are reports of residents complaining that they have still not received aid.

In Tagbilaran City, Bohol, volunteers have been working in shifts to repack goods for distribution to villages.

"We work from five o'clock in the morning up to 12 midnight to airlift goods to people especially in far flung areas," said Major Ronnie Torres Evarista, operations chief of the army's disaster response task force.

Evarista's unit uses helicopters to ferry supplies to remote areas that could not be reached by vehicles because of damaged roads and bridges.

"You see the emotion on the faces of people every time they see the helicopters bringing sacks of rice and canned goods," Evarista said in the middle of a sports oval that was used as a landing pad for military helicopters involved in the relief operation. "It is something that I cannot forget, maybe forever."

At least 198 people were killed when the earthquake struck, according to the National Disaster Risk Reduction and Management Council. More than 73,000 people remain in evacuation centers on Bohol.