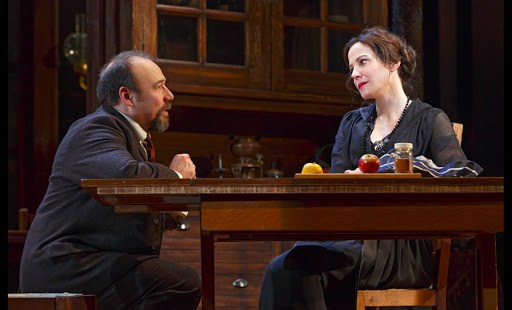 In spite of the very capable and accomplished people behind it, The Snow Geese misses the mark at just about every step of the way.

A champagne breakfast at 5 AM to celebrate the opening day of hunting season? Why, of course. Nothing is too extravagant for the Gaesling family of upstate New York, and nothing more important than upholding the legacy of their late father, Theodore. Or so believes Elizabeth Gaesling, his now widowed wife, who refuses to confront the reality that her late husband is dead and has left the family in financial ruin.

But even the champagne isn’t enough to muddle the clear thinking of Arnold Gaesling, the younger of the two Gaesling children. While older brother Duncan has been away at Princeton, Arnold has been at home – as he has been all of his young life – to straighten out the family accounting and hold the family together.

But financial ruin isn’t the only devastation at hand. Duncan is set to leave the next day to begin his military service in the First World War. When she’s sober, Elizabeth can hardly cope with the reality that her son – her favorite son – might never return home again (if there’s a home to return to, that is). Add to the mix her eccentric and somewhat estranged sister, Clarissa, and her German immigrant husband, Max, who have moved in with the family after their home in Syracuse was burnt to the ground in protest of Max’s German heritage, and you have all of the elements for a classic family drama. This drama, however, does not make for a successful play.

The Manhattan Theatre Club’s production of Sharr White’s new play, The Snow Geese, offers the similar anticipation that one might just feel on the evening before hunting season begins: the promise of a skilled marksman, a successful track record to draw from, and the hope of a successful bounty. Unfortunately, every shot is a misfire.

Under the very capable direction of Broadway veteran director Daniel Sullivan, Snow Geese is granted a mark of credibility before the curtain ever goes up. Sullivan is one of the premiere interpreters of Shakespeare and is well known for his work on Broadway hits Proof and Rabbit Hole, among many other original plays. Yet while he might be a seasoned marksman, this play proves to be an impossible target.

Television and stage star Mary Louise Parker, perhaps best known from her hit show, Weeds, offers a nuanced performance as Elizabeth Gaesling. She is emotionally vulnerable and unforgivably harsh, though surprisingly sympathetic.  At age forty-nine, her eternally young face makes it hard to conceive of her as a widowed matriarch with the life experience necessary to command the role of Elizabeth Gaesling. Even so, she tries hard and offers a modest, though understated performance.

Evan Jonigkeit and Brian Cross play brothers Duncan and Arnold. It’s clear from the show’s outset that the two have been distant from childhood, with Arnold always living in the shadow of his older brother, Duncan, who was given the best education, received the highest honors, and endless praise from their parents.  Regrettably, Sharr’s dialogue is as shallow as the older brother and misses the opportunity to explore the complexities of sibling rivalry, opting instead for a series of screaming matches and verbal insults. Both Jonigkeit and Cross seem to be capable actors, though one wishes they were given more to showcase than just the volume of their voices.

The two real standouts, however, are veteran stage actors Victoria Clark and Danny Burnstein as Clarissa and Max. While they too have suffered their own share of life’s misfortunes, such as the childhood death of their only daughter, the collapse of Max’s medical practice, and the savage burning of their home, they have managed to remain clear thinkers and serve as surrogate parents to Duncan and Arnold. Clark is given some of the show’s best lines, and she delivers them to perfection. Burnstein offers a heart wrenching performance as a the German immigrant who has spent almost thirty years as an American citizen, yet never accepted as one. He contributes both wit and wisdom to the fragile family, and it’s evident from this performance why he is one of the Broadway stage’s finest actors today.

Sharr White’s uneven script is a mix between dry imagination and unnecessarily complicated storytelling. There are so many tangential plotlines in this production that distract from the real drama at hand that one wonders whether he was firing in the dark or simply shooting at anything in sight. Either way, the intended target escapes him at every turn.

John Lee Beatty’s scenic design is masterful, and his revolving set makes the otherwise disastrous Gaesling home appear beautiful. Enhanced by Japhy Weideman’s fine lighting design, the stage at least provides the illusion of grandeur, even if rest of the show, like that of the family fortune, is bleak.

This very accomplished cast of actors that make up the Gaesling family tries hard to deliver what is otherwise a lackluster piece of theatre. Stories about family drama aren’t original, but when done well, they have the possibility of offering insight on our most local and closest ties. Yet rather than offering us a mirror in which we can examine our own lives and relationships, this production only offers a blurred mirage of possibilities unexplored. Unfortunately, the only hunt in Snow Geese is for that of meaning and clarity – something that some of the most talented marksmen in the business are unable to supply in this production.