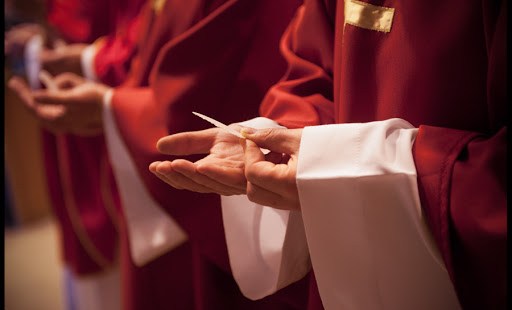 At a Mass on Thursday at Saint Peter’s Basilica, Pope Francis consecrated two men as bishops and exhorted them to be faithful to Christ, for he reaches men through their ministry.

At a Mass on Thursday at Saint Peter's Basilica, Pope Francis consecrated two men as bishops and exhorted them to be faithful to Christ, for he reaches men through their ministry.

“Christ, in fact, is who through the ministry of the bishop continues to preach the Gospel of salvation and sanctifies believers, through the sacraments of the faith,” the Bishop of Rome preached in his homily at the Oct. 24 Mass during which he consecrated Archbishop Jean-Marie Speich and Archbishop Giampiero Gloder.

The two have both been appointed to serve in the Vatican's diplomatic corps. Archbishop Speich, who was a priest of the Strasbourg archdiocese, has been appointed apostolic nuncio to Ghana; and Archbishop Gloder, who was a priest of the Padua diocese, is president of the Pontifical Ecclesiastical Academy, which trains priests for the diplomatic corps.

“Reflect attentively on what great ecclesial responsibilities these, our brothers, are called to,” Pope Francis said, reflecting on their place in the apostolic succession instituted by Christ for the sanctification of mankind.

“So as to perpetuate from generation to generation this apostolic ministry, the twelve gathered collaborators, passing on to them by the laying on of hands the gift of the Spirit received from Christ, who conferred the fullness of the sacrament of Orders.”

He noted that “thus, through the unbroken succession of bishops in the living tradition of the Church … the Savior's work continues and develops up to our time. In the bishop surrounded by his priests there is present among you the same our Lord Jesus Christ, high priest forever.”

Pope Francis said that Christ “in the fatherhood of the bishop adds new members to his body, which is the Church. And Christ in the wisdom and prudence of the bishop guides the people of God through he earthly pilgrimage to eternal happiness.”

“As for you, Jean-Marie and Giampiero, chosen by the Lord, reflect that you have been chosen from among men and for men, you have have been appointed for those things regarding God.”

The office of bishop, he advised them, “is in fact the name of a service, not of an honor,” and that bishops are called to “compete” in serving – rather than “lording it over” – their flocks.

Pope Francis exhorted them to “proclaim the Word in every opportunity: in season and out of season. Admonish, reprove, exhort with all magnanimity and teaching.”

Focusing on the grave importance of prayer, he went on to tell the newly consecrated that in this way, they will be able to “draw from the holiness of Christ the multiform richness of divine grace.”

“A bishop who does not pray is a bishop half-way. And if you do not pray to the Lord, you end up worldly.”

Following his discussion on prayer, the Roman Pontiff turned to the necessity of love.

“The love of a bishop: love, love with the love of a father and of a brother all whom God has entrusted to you. In the first place, love the priests and the deacons.”

He exhorted them to be attentive to their priests, not waiting to see them when the priests ask to see them: “respond immediately,” he exclaimed. “Be close to them.”

“But also love the poor, the helpless and those who need welcome and assistance. Exhort the faithful to cooperate” with you.

Pope Francis also advised the bishops to have care for those who are not Catholic or Christian, “because they too have been entrusted to you in the Lord. Pray much for them.”

He also noted the importance of collaboration among bishops, telling them to remember that “you need to bring with you a solicitude for all the Churches, aiding generously those who are most in need of assistance.”