When Ought We to Declare a Catholic Institution Dead? 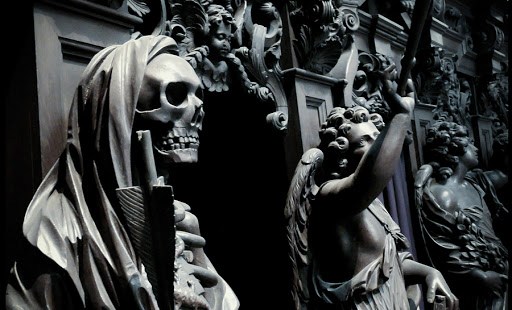 Ask whether the people at the institution are motivated by the Gospel. That should pretty well answer the question.

To those who grew up with me, especially, this pronouncement will come as a cataclysmic shock. After all, I was raised in the shadow of the Golden Dome at the University of Notre Dame, where my father taught philosophy for over fifty years. As a kid I saw pretty much every game, either at the stadium itself or on television, and I spent countless fall afternoons in the backyard throwing a football with frosty fingers pretending I was Number 3 – Joe Montana. If anyone ever was, I was born to be a fan of Notre Dame football.

At the beginning of Evelyn Waugh’s Brideshead Revisited, Waugh’s hero, Captain Charles Ryder, sums up the dreary three months he has spent at a British army camp in Scotland by saying: “Here love had died between me and the army.” I have felt a similar feeling, one which has increased in intensity over the years, in regard to my alma mater, Notre Dame. I felt it most poignantly on May 17, 2009, when the university awarded President Barack Obama, an unapologetically pro-abortion president, an honorary degree. I was on the south quad of campus that gorgeous spring day when Air Force One passed ominously overhead, though I was not on my way to the official commencement ceremony where the honorary degree was to be conferred. Instead, I was with my former colleagues at the Notre Dame Center for Ethics and Culture and many other stout defenders of Notre Dame’s Catholic identity (including the late, great Bishop John M. D’Arcy) at the “alternative commencement” organized by an impressive squadron of Notre Dame undergraduates. It was a bittersweet moment. That afternoon, to be sure, we band of brothers and sisters experienced the pride of a fighting remnant. But being part of a remnant can also be somewhat melancholy, as a remnant is defined, in part, by what it has lost.

After that day, it became harder to cheer, cheer for old Notre Dame. Saturday afternoon excitement about the football team seemed more and more like a temporary state of denial of Notre Dame’s identity crisis.

Still, it would be too much to say that my love for Notre Dame, like Charles Ryder’s love for the army, has died completely. If only because both of my parents are buried, along with my brother Michael, in Cedar Grove Cemetery along Notre Dame Avenue, I will forever enter the confines of that campus with a heart heavy with love. I also believe that the grace that motivated the founders of Notre Dame and generations of faithful faculty, students, and alumni is always available as a source of renewal. I know that renewal, partial and often obstructed though it is, is in fact occurring every day at Notre Dame, aided by many friends of mine who are nobly spending their lives in her service. Our Lady’s mediation does not falter.

Yet watching Notre Dame teeter from her former greatness has often raised the question in my mind: when ought we to declare a Catholic institution dead? A cultural institution of any kind, not just a university, is comprised of fallible human beings. Traditions can degenerate all too easily. So at what point do we have to acknowledge, on pains of living in pure fantasy, that a Catholic institution no longer is such?

Recently, the novelist, Academy Award-winning screenwriter, and Georgetown University alumnus William Peter Blatty spearheaded the submission of a petition declaring, in canon law, that Georgetown University was causing scandal in repeatedly taking actions that undermine her Catholic character. The petition asked the Catholic Church to require that Georgetown implement Ex Corde Ecclesiae, the papal constitution governing Catholic colleges and universities. If Georgetown fails to comply, the petition calls for “the removal or suspension of…Georgetown’s right to call itself Catholic and Jesuit in any of its representations.” The petition was sent to Cardinal Donald Wuerl, Archbishop of Washington, D.C., who has since passed it on to Pope Francis.

Mr. Blatty and his cohorts have judged that Georgetown’s degeneration has reached a point in which the Catholic essence of the institution is in jeopardy. The patient may still be breathing, though it may only be the death rattle.

In May 2012, an editorial in Cardinal Weurl’s archdiocesan newspaper, the Catholic Standard, had this to say about the situation at Georgetown: “[M]uch of its leadership and faculty find their inspiration in sources other than the Gospel and Catholic teaching”; the “vision guiding university choices does not clearly reflect the light of the Gospel and authentic Catholic teaching.”

In these statements, we find the diagnostic principle we need in order to discern whether a Catholic institution of whatever kind is flourishing or dying: are the people of the institution inspired by the Gospel and Catholic teaching? Or are they inspired, rather, by one or another design of worldly success antithetical to the Gospel?

A vivid contrast to the situation at Notre Dame and Georgetown is that of Benedictine College in Atchison, Kansas. I am biased in this judgment, admittedly, as my eldest daughter is currently a freshman at Benedictine. But my bias is pretty well informed by facts culled not only from my visits to Benedictine and my daughter’s experience, but also from my seventeen year-career in academia, during which I developed a pretty good sense of how the sausage is made in Catholic academia. No institution is perfect, of course, but what I see, generally, at Benedictine is an institution whose leaders, faculty and students are inspired by the Gospel and Catholic teaching. The joy of this commitment is palpable on campus, and the public consecration of the college to Our Lady that occurred on September 8 was a lovely expression of it.

In walking the campus at Benedictine, it has occurred to me that this is how Notre Dame must have seemed to my father when he first arrived there in the mid-1950s. A tight-knit, faithful, truly family community, passionately devoted to the Catholic intellectual tradition. Today, however, in the words of my friend, Notre Dame philosophy professor Fred Freddoso, Notre Dame is best described as “a secular school in a Catholic neighborhood.” What a sad comment that is. Perhaps a more vigorous renewal is forthcoming at Notre Dame and even at Georgetown, but I’ll leave that in the hands of the Holy Spirit and Our Lady.