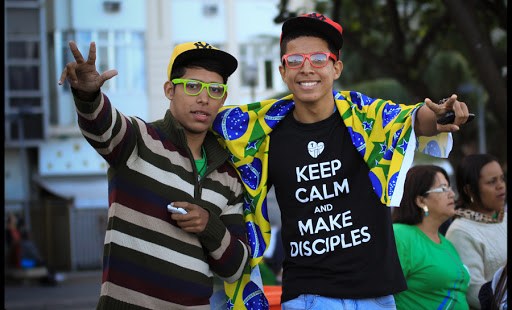 A local Catholic leader describes the importance of World Youth Day 2013 as Pope Francis encouraged Brazil’s Catholics to feel a sense of responsibility for the whole Church.

Archbishop of Aparecida and Chairman of the National Conference of Bishops of Brazil, Cardinal Raymundo Damasceno Assis made his comments in a meeting with staff of the international Catholic pastoral charity Aid to the Church in Need (ACN).

In July, more than three million young people joined together with Pope Francis in Rio de Janeiro for WYD.

“The Church is aware of its responsibility for the mission, and is conscious of the fact that the work of evangelization cannot be separated from social development.”

The Chairman of the Conference of Bishops of Brazil further explained, “Brazil has a young population. The period of preparation for World Youth Day, and the gathering itself, gave a great stimulus.”

“We want to appreciate young people more, make more education possible, and give them more responsibility in our congregations.”

In the words of Cardinal Damasceno, the Church strives for communion with God and a life in dignity for all and supports all initiatives that foster life from its beginning and protect life until its end.

At the same time, the Cardinal recalled the 5th General Assembly of the Bishops of Latin America and the Caribbean in Aparecida in 2007.

In the presence of Pope Benedict XVI, it approved a final document that declared among other things: “The joy of being disciples and missionaries can be seen in a special way in the places where we create fraternal communities.”

“We are called to be a Church with open arms, who knows how to welcome and value each one of her members. Therefore, we encourage the efforts made in the parishes to become ‘home and school of communion’, animating and forming small communities and basic church communities, as well as in the lay associations, ecclesial movements and new communities.”

Originally published by Aid to the Church in Need on 31 October 2013.