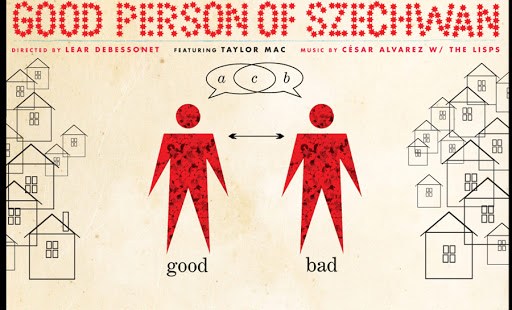 The story of Bertolt Brecht’s classic play is certainly complicated – but so is human nature.

The history of Bertolt Brecht's classic play, Good Person of Szechwan, is as legendary as it is complex. The fabled tale of the village prostitute, Shen Tei – who sets out to lead a truly good life in order to right past wrongs – is one of the twentieth century’s most memorable works of theatre. The Foundry Theatre’s current production at the Public Theater ensures that this memory continues afresh.

When three gods arrive in the local village of Szechwan fatigued by their travels, Shen Tei is the only resident willing to provide them with shelter. As a blessing for her troubles, the gods bestow Shen Tei with a sizable sum of money that she then uses to purchase a tobacco shop. As the recipient of unexpected good fortune, she sets out to provide the same care and kindness to others less fortunate in the village, but soon the shop devolves into a revolving door of unseemly inhabitants lacking self-control. In order to restrain these characters, Shen Tei decides to invent an alter ego: Shui Ta.

Shui Ta is a fabricated male cousin of Shen Tei. As a successful businessman, Shui Ta is the anti-Shen Tei. He demands order and discipline, and is much despised by the residents of Szechwan. When Shen Tei falls in love with a troubled and unemployed pilot from Peking, it is Shui Ta who rejects the relationship and arranges a marriage between Shen Te and the local barber who can provide for her financial future. When the villagers seek out the charity of Shen Tei in order to feed and clothe their families, it is Shui Ta who rufuses to give them money, and instead forces them to work long hours in a factory in order to earn a living. Shen Tei is known for her mercy and compassion; Shui Ta is known as a heartless autocrat. Sounds complicated? It is. But so is human nature.

Leading the charge in this production is the ever-impressive Taylor Mac (Shen Tei/Shui Ta). Mac’s performance is a two-and-a-half-hour tour de force of endless costume changes and mood swings. Not only is this gender-bending role physically demanding; it’s as equally emotionally taxing for actor and audience alike. The exploration of our better nature and the inhibitions resulting from our darker impulses is navigated with care and precision by Mac. His performance reminds us that we are all capable of being both Shen Tei and Shui Ta.

Under the inventive direction of Lear DeBessonet, this bold production allows for the often inaccessible Brecht to feel relevant and worth revisiting. Despite a few weak moments and belabored scenes, the end result is wildly entertaining. Physical humor abounds, and the story is nicely aided by Cesar Alvarez's original musical arrangements. Good Person of Szechwan is very much an ensemble-driven piece of theatre, and this talented company offers a robust, though sober, portrayal of our fragile humanity. It is the hope that our shared goodness can reorder and reorient our broken societies that guides both this play and these performers.

In the end, it could be said that Good Person is a quest for happy endings for both communities and individuals alike. Brecht's solution is one in which political and economic systems are able to right social wrongs by ending practices of greed and exploitation. Present day movements such as Occupy Wall Street offer similar critiques of the systems that sustain inequalities and social disparities, yet to simply demand a new system is only one potential part of the solution. As the deeper – and more salient – message of Good Person reminds us, the possibility of goodness must first be attained on a personal level before reaching the political. And if the performances that make up this production are any indication, there is much good that is capable of being achieved.

The Foundry Theatre's production of Good Person of Szechwan opened on October 29th at the Public Theater and runs through November 24. Written by Bertolt Brecht, translated by John Willett, and directed by Lear DeBessonet. Starring Taylor Mac, Lisa Kron, and David Turner.