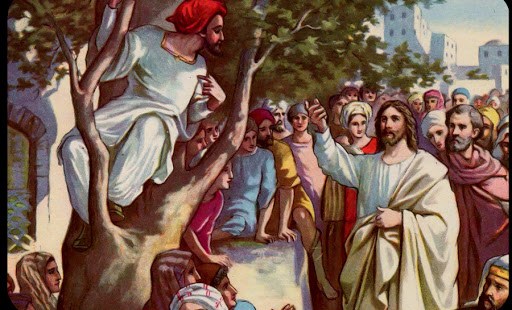 During his Sunday Angelus, Pope Francis praised the ‘ridiculous’ actions of the tax collector Zaccheus, who brought himself above the crowd in order to have contact with Jesus.

In his Angelus message to the crowds in St. Peter’s Square, Pope Francis praised the ‘ridiculous’ actions of Zaccheus, the short tax collector who climbed a tree in order to be able to see Jesus in the crowds.

“This external gesture, a little ridiculous, nevertheless expresses the interior attitude of a man who seeks to bring himself above the crowd in order to have contact with Jesus,” Pope Francis said Nov. 3.

Despite the oddity of Zaccheus’ action, it serves as a model for sinners who may feel far away from Jesus, he explained.

“But let’s look at Zaccheus today in the tree: he is ridiculous, but it is a gesture of salvation,” the Pope said. “And I say to you: if you have a burden on your conscience, if you have shame about many things that you have done, stop yourself a little, don’t be afraid, think of the One who awaits you, because he never stopped remembering you, thinking of you.”

“And this is your Father, it is God, it is Jesus who awaits you. Climb up, just as Zaccheus did; climb the tree of your desire to be forgiven. I assure you that you will not be disappointed. Jesus is merciful and never gets tired of forgiving.”

Zaccheus was “despised” by the people of Jericho because of his occupation as a tax collector, and yet after he climbs a tree to see Jesus, the Lord “calls him by name,” noted Pope Francis.

“This short man, rejected by everyone and far from Jesus, is like the lost in anonymity; but Jesus calls him, and this name, Zaccheus, in that language of that time, has a beautiful meaning full of allusions: ‘Zaccheus’ actually means ‘God remembers.’ That’s beautiful: ‘God remembers’,” he reflected.

Jesus then goes to the house of Zaccheus, “drawing the criticism of all the people of Jericho,” because “even in that time, they gossiped a lot, eh?” said Pope Francis, hinting at the danger of idle chatter, a recurring theme in his speeches.

“And the people were saying, ‘but how? With all the good people that there are in the city, he goes to stay in the very house of the tax collector?’” recounted the pontiff.

“Yes, because he was lost; and Jesus says, ‘Today, for this house has come salvation, because even he is a son of Abraham.’ In the house of Zaccheus, from that day, entered joy, entered peace, entered salvation, entered Jesus.”

Zaccheus’ social status did not deter Jesus from coming to his home. This story expresses that “there is not a profession or a social condition or a crime of any type that can erase from the memory and from the heart of God a single one of his children.”

“God remembers, always, he forgets no one that he has created,” added Pope Francis.

“He is Father, always watchfully and lovingly waiting to see revived in the heart of his child the desire to return home. And when he recognizes this desire, even if simply hinted at, and many times almost unconscious, he is immediately next to him, and with his forgiveness makes the path of conversion and return lighter.”

“Brothers and sisters, let us also call upon the name of Jesus!” urged the Pope. “In the depths of our hearts, listen to his voice that tells us, ‘Today I must stop at your house; I want to stop at your house and in your heart,’ that is, in your life.  And let us welcome him with joy.”

Pope Francis’ speech was met with cheers and applause from the packed square.   Flags waved as the Pope concluded his Angelus greeting with various welcomes to Romans and pilgrims to the city.  As is his custom, Pope Francis closed by wishing everyone a “good Sunday and a good lunch!”