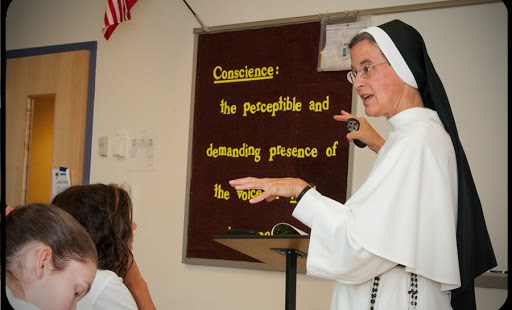 Conceived amid the nation’s stem-cell debate, the John Paul the Great Catholic High School bioethics program is the only program of its kind – and it’s working.

When current high school students were born, the United States was engaged in a debate over something that most Americans could not even see – days-old human embryos and whether the federal government should fund research that used their stem cells.

President George W. Bush settled the question on Aug. 9, 2001, with an executive order allowing funding for research involving stem-cell lines already created, but not for any future lines. After much apparent consultation, including with members of the President’s Council on Bioethics, Bush hoped his solution would satisfy, on the one hand, a lobby that insisted that science needed the ability to extract stem cells from human embryos in order to find cures, and on the other, the Catholic Church and others defending human life principles, who pointed out that the procedure required the killing of an unborn human being in its first days.
That same year, Bishop Paul S. Loverde committed his support to building a new high school in the Diocese of Arlington, Va. It was decided that the school would feature a bioethics curriculum.

It would be – and remains – the only Catholic high school in the nation with a four-year bioethics program.

Pope John Paul the Great High School was conceived and born, and has since grown up in a world that is increasingly struggling with such bioethical issues – and that struggle will not subside any time soon. From questions having to do with permissible ways to generate new life to valid reasons for ending a life, there is no escaping bioethics. And yet, statistics suggest there is a serious lack of preparation among Catholics for dealing with those questions.

According to a 2010 survey, only 33% of Americans age 18-29 who identified themselves as Catholic realized that embryonic stem-cell research is immoral, while 65% of them consider medical testing on animals to be morally wrong.

Indeed, current law, culture, and practice seem to have a much stronger influence than the Catholic teaching young people should be getting in their family, church, school, or religious education program.

“Young Catholics today have grown up in a country where it is a woman’s legal right to kill her unwanted or diseased unborn child,” said Dominican Sister Terese Auer, chairwoman of the bioethics department at John Paul the Great and the author of the bioethics curriculum there. “They are living in a society where approximately 80% of their fellow Catholics are either sterilized, contracepting, or using abortifacients. In this society, over 400,000 human embryos are frozen and stored in embryo banks, waiting to be needed some day for reproduction or for research. Others have been ‘custom made’ to satisfy the desires of their makers. Young people today have heard of the ‘right’ to doctor-assisted euthanasia, have seen their parents’ tax dollars fund destructive embryo stem cell research, and have been bombarded with propaganda advocating redefining marriage. They are living in a society that spent an estimated $41 billion on the health and happiness of their pets in 2007, while homeless and poor human beings abound. If ever there has been a generation in need of an education in bioethics, it is the present one.”
John Paul the Great – like its namesake – Is here to help.