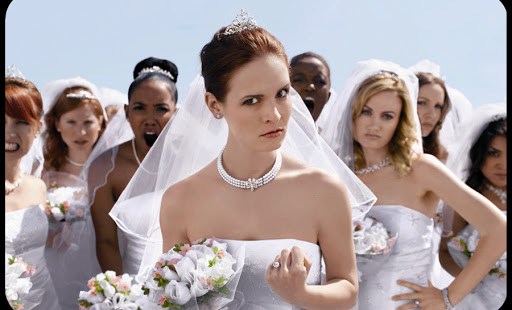 Yes, weddings are exciting and are meant to be shared. But if we’re more interested in glamour than the actual marriage, there’s a problem.

Now that instant Internet access is the norm for modern society, life has become increasingly more publically documented. From babies’ first steps to last night’s restaurant meal, there’s an online time and place to share just about everything. But arguably, no life event has become more flaunted and publicized than the modern-day marriage.

Take the TLC program Four Weddings as a grim example. In each episode, four women attend each other’s weddings and judge which one is best in the categories of food, venue, dress and overall experience. Whoever wins gets a lavish, all-expenses-paid honeymoon. The women who choose to be on this show have camera crews and three competitors judging every aspect of their milestone event. Interestingly, the show spends little to no time on the couple themselves or their love for each other, but an infinite amount of time on the bride’s choice of dress, wedding favors, reception entertainment, decadent dessert tables… the list goes on. TLC also hosts Say Yes to the Dress (which glamorizes the dress-buying process) and David Tutera’s My Fair Wedding, another “wedding” show that focuses exclusively on making the reception as lavish as possible and pays no mind to the significance of the sacrament or the couple’s relationship.

Granted, not every wedding is publicly exhibited to the extent shown on these programs. But when examples of lavish exhibition are so widespread in society, is it any wonder that their influence seeps into the public consciousness? And the proof of their influence is becoming more and more evident.

A simple search for proposals on YouTube will yield hundreds of publically recorded engagements, including the ever popular “flash mob” proposal, where the groom recruits an entire crowd of strangers to be a part of the proposal. While engagements such as this used to be somewhat of a rarity, their popularity has grown by leaps and bounds since social networking became more of an everyday activity.  Nowadays, photographing or videotaping the actual proposal (to be put online later for family and friends to see) has even become somewhat standard.

Facebook also plays a part in facilitating the spectacle. Many couples nowadays hire expensive, professional photographers to capture an engagement session (complete with glamorous settings and even wardrobe changes) which is then made public through a Facebook photo album or other photo-sharing networks.

And it’s not just the proposal that gets the public spectacle treatment – the photo-sharing website Pinterest is a candid example of society’s growing emphasis on spectacular wedding receptions. Although Pinterest is a helpful tool in scrapbooking and event-planning, it certainly doesn’t help matters with its troves of aggregated photo content dedicated to lavish reception details. Nothing is necessarily wrong with ensuring the wedding day is an enjoyable time for family and friends, but society as a whole might be missing something when more attention is given to table linen colors and wedding favors than to the permanence and significance of the marriage itself.

The average wedding cost as of 2012 clocked in at just shy of $30,000, an all-time high since the economic downturn of 2008. More and more couples are choosing lavish destination weddings and additional reception expenses for the sake of providing a grand statement to their guests. But at the end of the day, is there a harmful aspect to this? After all, people naturally become excited at the prospect of marriage and are justified in wanting to share their happiness with the world.

Yet it is possible that a line is being crossed with the extent of some of this publicity and extravagance. It’s become common knowledge that 50% of marriages in the United States end in divorce. With statistics like that, couples might benefit from trending away from the more shallow aspects of the wedding day and focusing on the commitment and permanence that getting married entails. And society as a whole might do well to distinguish between generosity and excess.