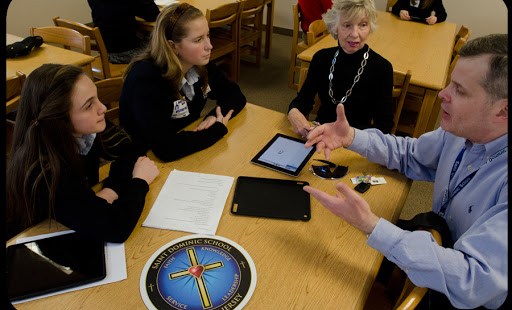 The letter signed by more than 130 Catholic scholars says, “We believe that implementing Common Core would be a grave disservice to Catholic education in America.”

More than 130 leading Catholic scholars have signed a letter to the U.S. bishops criticizing the Common Core State Standards for school curricula, warning that the core philosophy will “undermine Catholic education.”

“We believe that implementing Common Core would be a grave disservice to Catholic education in America,” said the Oct. 16 letter, organized by Notre Dame Law School professor Gerard Bradley.

The scholars said they are convinced that the Common Core standards are “so deeply flawed” that they should not be adopted by Catholic schools and that those which have endorsed the standards should “seek an orderly withdrawal now.”

The Common Core State Standards were created with the intention of setting uniform educational standards across various U.S. states. The effort to create the standards originated with the National Governors’ Association and the school superintendent leadership organization, the Council of Chief State School Officers.

The Bill and Melinda Gates Foundation has become a major backer of the project, giving more than $160 million to develop and promote it, Politico reports. The Obama administration has also created strong monetary incentives for states to adopt the curriculum.

Since 2010, more than 100 Catholic dioceses have decided to implement the Common Core curriculum, as have 45 U.S. states and the District of Columbia.

In some cases, Catholic schools are following the lead of state law. In Indiana, Catholic schools had to adopt the Common Core because state vouchers are available to religious schools only if they adopt state standards, National Review Online reported in May.

The Catholic scholars’ letter, sent to every bishop in the U.S., said the curriculum lacks “America’s Catholic schools’ rich tradition of helping to form children’s hearts and minds.”

“In that tradition,” they wrote, “education brings children to the Word of God. It provides students with a sound foundation of knowledge and sharpens their faculties of reason. It nurtures the child’s natural openness to truth and beauty, his moral goodness, and his longing for the infinite and happiness.”

“Education in this tradition forms men and women capable of discerning and pursuing their path in life and who stand ready to defend truth, their church, their families, and their country.”

By contrast, they said, Common Core is “a recipe for standardized workforce preparation” that “shortchanges” the goals of Catholic education.

They charged that curriculum standards reduce the study of “classic, narrative fiction” in favor of “informational texts.” This reduces reading to “a servile activity” that does not explore “the creativity of man, the great lessons of life, tragedy, love, good and evil, the rich textures of history that underlie great works of fiction, and the tales of self-sacrifice and mercy in the works of the great writers that have shaped our cultural literacy over the centuries.”

Sister John Mary Fleming, executive director for Catholic education at the U.S. bishops' conference, told the New York Times that the criticism was misconceived – that the standards should be regarded not as a ceiling, but as a floor.

“We see the Common Core as a minimum, just as we’ve seen other state standards in the past as a minimum, and we intend to go way beyond that.”

Critics, however, have questioned whether shifts in focus and funding will pressure schools to emphasize standardized tests and a narrow set of skills aiming at college preparation rather than comprehensively educating the entire person.

They also question whether the curriculum standards for earlier grades are excessively complex and whether students and teachers have been prepared for the changes.

At present, only math and English Common Core standards have been released. However, the scholars’ letter warned that standards in other areas will likely “promote the prevailing philosophical orthodoxies,” including a “materialist metaphysics” incompatible with the spiritual worldview that Catholicism presupposes.

“We fear, too, that the history standards will promote the easy moral relativism, tinged with a pervasive anti-religious bias, that is commonplace in collegiate history departments today.”

The letter said Catholic officials approved the curriculum with “good intentions” though “too hastily,” and with “inadequate consideration of how it would change the character and curriculum of our nation’s Catholic schools.”

Catholic skeptics of Common Core also include some high school principals. The Cardinal Newman Society, an organization dedicated to Catholic identity in education, surveyed 73 principals of schools that had made its Catholic High School Honor Roll or received honorable mention in 2012.

Forty percent said their diocese and local Catholic schools should pause and study the standards; almost one-third said they should decline to participate.