The Dead People I Knew When They Were Alive: A Review 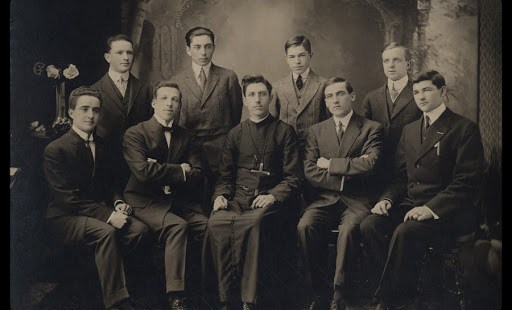 Fr. George Rutler is a Renaissance man and one of New York’s best pastors. In his new book, he recounts fascinating stories he’s heard from world leaders and saints.

The Rev. George William Rutler, S.T.D., a priest of the Archdiocese of New York, is a man of parts: graduate of Dartmouth, Oxford, and Rome’s Angelicum (“the Dominican faculty that flunked Galileo,” he informs me); linguist, painter, violinist, and boxer; preacher extraordinaire. One of Catholicism’s most successful pastors, he has been a magnet attracting converts and vocations for decades. Father Rutler is also that contemporary clerical rarity, an accomplished man of letters who writes as gracefully as he speaks (or throws a punch, or paints a watercolor, or pours you another glass of champagne).

In Cloud of Witnesses: Dead People I Knew When They Were Alive—why can’t I come up with subtitles like that?—Father Rutler told amusing, touching, and/or revealing anecdotes about a cast of characters ranging from the late Queen Mother Elizabeth to Mother Teresa: “characters … who have impressed me because God in different ways impressed them … [and who] taught me something about the infinite variety of human grandeur.” Now, with Principalities and Powers: Spiritual Combat 1942-1943, Father Rutler does the seemingly impossible—he finds new tales of, and new meaning in, World War II, perhaps the most written-about event in human history.

Many of those stories involve the bravery of churchmen in the face of tyrants.

Thus when Greek Orthodox Archbishop Damaskinos of Athens ordered his people to hide persecuted Jews, SS commander Jürgen Stroop threatened to shoot the archbishop. Rutler finishes the tale by recounting a striking example of episcopal sangfroid: “The archbishop replied by recalling the lynching of Patriarch Gregory of Constantinople by the Turks in 1821: ‘According to the tradition of the Greek Orthodox Church, our prelates are hanged, not shot. Please respect our tradition.’” The archbishop, happily, lived until 1949; Stroop was hanged after the war for his role in liquidating the Warsaw Ghetto.

Then there was Cardinal Pierre-Marie Gerlier, archbishop of Lyons and Primate of the Gauls, who “threatened to excommunicate anyone who bought property unjustly seized from Jewish families and instructed Catholics to hide the children of Jews who were in French concentration camps or who had been deported to Germany.”

Gerlier was not alone in his bold defiance of the Nazis and their French collaborators. When Bishop Felix Roeder of Beauvais failed to dissuade the local authorities from genocide by argument, he took, as Father Rutler neatly puts it, “another course.” The Germans had ordered Beauvais’s Jews to register at town hall. “On the strength of his claim to have had a distant Jewish ancestor, the bishop formally processed through the streets to register his own name, wearing full pontifical vestments and preceded by an acolyte carrying the cross.”

Extraordinary times call for extraordinary measures, even in the Church. Thus Rutler reminds us that, given the draconian conditions prevailing in a Poland then harboring a future pope, Pius XII granted “for the duration of the war a plenary indulgence for all living in Polish territories who, at the point of death and being unable to confess or communicate, invoke even mentally the Holy Name of Jesus with sorrow for their sins, and accept their death with resignation.”

Father Rutler’s critical sense is not without humorous edge: “Giovanni  Bottai, the Italian minister for education and editor of the review Critica Fascista, wrote in the opaque rotundity that has not ceased being dear to some Italian journalists….” Yet even while having some fun with the gaucheries of the pompous, George Rutler has his eye firmly fixed on what was really at stake in the Second World War: “The Fascists were greatly upset when, in the presence of the pope and 25,000 worshippers, Carlo Cardinal Salotti preached a sermon in which he attacked the logic of the war and desired ‘a kingdom of love that will be proof against the errors made in the name of race and nation, a kingdom of liberty which will make tyranny impossible, a kingdom of the spirit which will free men from materialism.’”

A splendid book from a marvelous man and a great priest: kudos to St. Augustine Press for capturing Father Rutler’s wit and wisdom between covers.