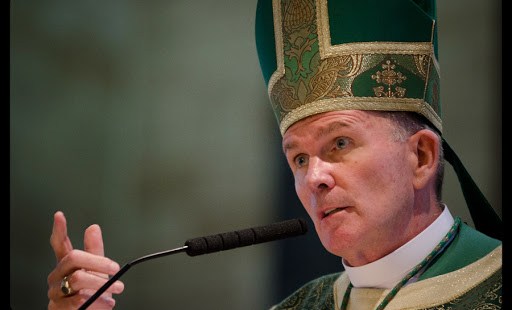 The bishops unanimously approved a statement at their fall General Conference reaffirming their opposition to the “coercive HHS mandate”. Will they call Obama’s bluff?

At the conclusion of their fall General Assembly, the bishops of the USCCB unanimously approved and issued a special message reaffirming their opposition to the HHS mandate.

“We stand together as pastors charged with proclaiming the Gospel in its entirety,” the statement reads. “Yet with its coercive HHS mandate, the government is refusing to uphold its obligation to respect the rights of religious believers.”

Catholic Church organizations serve one in sixth patients in the U.S.. The bishops say they wish they could focus on continuing that work, rather than fighting the HHS mandate. “The current impasse is all the more frustrating because the Catholic Church has long been a leading provider of, and advocate for, accessible, life-affirming health care. We would have preferred to spend these recent past years working toward this shared goal instead of resisting this intrusion into our religious liberty. We have been forced to devote time and resources to a conflict we did not start nor seek.”

The bishops also cited inspiration from the Holy Father: “Pope Francis has reminded us that ‘In the context of society, there is only one thing which the Church quite clearly demands: the freedom to proclaim the Gospel in its entirety, even when it runs counter to the world, even when it goes against the tide.’”

“These men do not want to be involved in politics,” says Ronald J. Rychlak, Butler Snow Lecturer and Professor of Law at the University of Mississippi School of Law, “that is not their goal. They are, however, unwilling to cede all authority over social matters to the politicians. By speaking to moral truths and by defending the right to state those moral truths, the bishops are being pastors, teachers, and true shepherds.”

Stephen Krason, a political science professor at Franciscan University, wonders if the statement doesn’t go far enough. “It is encouraging to see that the bishops' statement passed unanimously, but it may not have been strong enough.”

“I wonder if what was not needed was a unanimous statement that the bishops would not comply or permit their institutions to comply, as best as they can exercise control over them. Then the ball would squarely be in the Obama administration's court. […] My sense is that that would call the administration's bluff.”

Journalist, author, and commentator Russell Shaw attended the fall General Conference and was dismayed by a lack of understanding among reporters of the situation of the Church. “I was embarrassed by some of my colleagues in the press corps who kept pestering the bishops about why they weren't making yet another statement about poverty. Over the years the bishops have issued countless statements on poverty and social justice. Moreover, they've repeatedly backed up those words with money and action. The bishops and the Church have no need to apologize to anybody on this score.”

“Against that background, I was delighted that the bishops reaffirmed their principled opposition to the HHS mandate. The same people who criticize the bishops for not saying enough about poverty seem not to understand that if the Church refuses to knuckle under to this infringement on conscience, the American government apparently will respond with fines that will effectively put many Church institutions serving the poor out of business besides doing serious damage to other ministries and apostolates.”

Author John Zmirak sees the Church’s stand against the HHS mandate as part of a greater struggle for freedom against an ever expanding federal government.

“The expansion of government in the U.S. is inexorable, and suffocating to every independent entity outside the State, from the parish to the Boy Scouts, from the workplace to the family. Leftist distortions of ‘equality’ have empowered the government to crush the freedom of contract and freedom of association – freedom of religion was clearly the next target on their list. As the State, with the help of ‘social justice Catholics’, imposes more laws designed to ‘force us to be free’, there will be fewer nooks and crannies where we may follow our consciences without incurring fines or prison sentences. I fear that few Catholics will risk much to tell Big Brother 'no’, and that those who do will be written off as extremists–just as happened to Operation Rescue.

Zmirak has this advice for Catholics. “Stop promoting the expansion of government to replace the corporal works of mercy; stop giving political cover to the enemies of the Church by endorsing leftist economic policies; stop trying to flood the country with immigrants who will vote for Democrats.”

The full text of the USCCB’s ‘Special Message’ on the HHS mandate:

Special Message from the Bishops of the United States

The bishops of this country have just concluded their traditional fall meeting in Baltimore and have spent time on issues important to them and their people: help to those suffering from Typhoon Haiyan; an update on the situation in Haiti; matters of worship and teaching; service to the poor; and comprehensive immigration reform. Among those priorities is the protection of religious freedom, especially as threatened by the HHS mandate.

Pope Francis has reminded us that “In the context of society, there is only one thing which the Church quite clearly demands: the freedom to proclaim the Gospel in its entirety, even when it runs counter to the world, even when it goes against the tide.”

We stand together as pastors charged with proclaiming the Gospel in its entirety. That Gospel calls us to feed the poor, heal the sick, and educate the young, and in so doing witness to our faith in its fullness. Our great ministries of service and our clergy, religious sisters and brothers, and lay faithful, especially those involved in Church apostolates, strive to answer this call every day, and the Constitution and the law protect our freedom to do so.

Yet with its coercive HHS mandate, the government is refusing to uphold its obligation to respect the rights of religious believers. Beginning in March 2012, in United for Religious Freedom, we identified three basic problems with the HHS mandate: it establishes a false architecture of religious liberty that excludes our ministries and so reduces freedom of religion to freedom of worship; it compels our ministries to participate in providing employees with abortifacient drugs and devices, sterilization, and contraception, which violates our deeply-held beliefs; and it compels our faithful people in business to act against our teachings, failing to provide them any exemption at all.

Despite our repeated efforts to work and dialogue toward a solution, those problems remain. Not only does the mandate undermine our ministries’ ability to witness to our faith, which is their core mission, but the penalties it imposes also lay a great burden on those ministries, threatening their very ability to survive and to serve the many who rely on their care.

The current impasse is all the more frustrating because the Catholic Church has long been a leading provider of, and advocate for, accessible, life-affirming health care. We would have preferred to spend these recent past years working toward this shared goal instead of resisting this intrusion into our religious liberty. We have been forced to devote time and resources to a conflict we did not start nor seek.

As the government’s implementation of the mandate against us approaches, we bishops stand united in our resolve to resist this heavy burden and protect our religious freedom. Even as each bishop struggles to address the mandate, together we are striving to develop alternate avenues of response to this difficult situation. We seek to answer the Gospel call to serve our neighbors, meet our obligation to provide our people with just health insurance, protect our religious freedom, and not be coerced to violate our consciences. We remain grateful for the unity we share in this endeavor with Americans of all other faiths, and even with those of no faith at all. It is our hope that our ministries and lay faithful will be able to continue providing insurance in a manner consistent with the faith of our Church. We will continue our efforts in Congress and especially with the promising initiatives in the courts to protect the religious freedom that ensures our ability to fulfill the Gospel by serving the common good.

This resolve is particularly providential on this feast of the patroness of immigrants, St. Frances Xavier Cabrini. She was a brave woman who brought the full vigor of her deep religious faith to the service of the sick, the poor, children, the elderly, and the immigrant. We count on her intercession, as united we obey the command of Jesus to serve the least of our brothers and sisters.

Stephen Krason is political science professor at Franciscan University, a lawyer, and the founder and president of the Society of Catholic Social Scientists. He has written numerous books, some academic, some for a larger audience, the most recent being The Transformation of the American Democratic Republic.

Ronald J. Rychlak is the Butler Snow Lecturer and Professor of Law at the University of Mississippi School of Law.

Russell Shaw is former Secretary for Public Affairs of the U.S. Catholic bishops conference. His books include American Church: The Remarkable Rise, Meteoric Fall, and Uncertain Future of Catholicism in America and To Hunt, To Shoot, To Entertain: Clericalism and the Catholic Laity.