The Simple Beauty of Lily & Madeleine 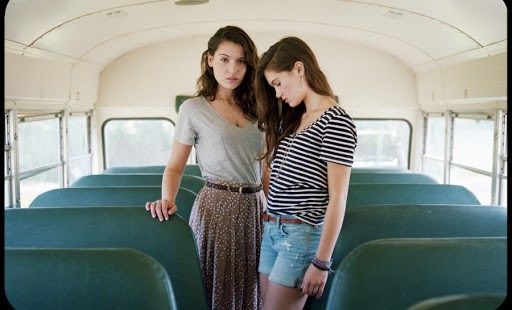 Dreamy, ethereal, and wistful, ‘Lily & Madeleine’ is a polished debut free of gimmicks – in a word, it radiates artistry.

“Like truth, beauty resides in simplicity,” writes Anthony DeCurtis on Lily & Madeleine’s Bandcamp. “When it manifests itself, it doesn’t require elaborate arguments or proofs; you can’t debate someone into apprehending it. It’s apparent and all it requires is appreciation, or perhaps even love. Such are the songs of Lily & Madeleine.”

Lily & Madeline Jurkiewicz – old souls from Indianapolis who are just 16 and 18 – never anticipated making a career out of singing. “It’s overwhelming and also exciting,” explains Madeline, the older sister and soprano. “We hadn’t even thought about a career. I had just finished high school and Lily is still in high school… but this is really what we love to do. Music is so important to us.”

But a few years ago, the sisters decided to upload their acoustic covers of Mumford & Sons, Fleet Foxes, and First Aid Kit to YouTube – and before long, the videos caught the attention of producer Paul Mahern, who put the sisters on the path to national acclaim.

“I’ve been making music for 30 years,” Mahern muses. “I don’t think I’m jaded, but I’ve pretty much heard everything. But actually being in the room with those two girls and seeing it, I knew there were no tricks because they were right there in front of me. It just blew my mind.”

The Jurkiewicz sisters eventually self-released a digital EP, The Weight of The Globe, in January of 2013 – and the video for the first single “In the Middle” went viral. Before long, indie rocker Sufjan Stevens’s label, Asthmatic Kitty, was knocking at their door, proposing a re-release of the EP and a full-length debut. Lily & Madeline, the fruit of that collaboration (you can stream and buy the album here), is being praised by USA Today, Paste Magazine, and the New York Times, which called it an “openhearted and bittersweet” contribution to the folk-rock revival sweeping popular music and culture.

The first thing that jumps out about Lily & Madeline is how different they are from other young female singers. The sisters’ autumnal sound stands in stark contrast to the manic club tracks and two-dimensional radio hits crowding up the charts, and their unassuming manner is far removed from the glorified lifestyle of the rich and famous (“Kardashian types,” Madeline calls them). Dreamy, ethereal, and wistful, Lily & Madeleine is a polished debut free of gimmicks – in a word, it radiates artistry.

The album is not all self-serious gloom, though – far from it. Songs like “Nothing But Time” and “I’ve Got Freedom” are iridescent and summery, carried by the carelessness of youth. But the sisters are undoubtedly at their finest and most promising when their natural elegance extends into a spirit of longing. “Someday I'll find the right words, and I’ll bloom where I was planted long ago,” they sing on the opening track, “Sounds Like Somewhere.” “Until then, I'll be waiting, hoping to one day let go.”

Throughout the album, this “pining” often manifests itself in the form of young love. Songs like “Disappearing Heart,” “You Got Out,” and “Come to Me” express the contours of a broken heart and the lasting scars of lost love.

But it also takes on the form of a more universal longing, of the human spirit aching for fulfillment. From the monstrance-like cover of their EP, to new songs like “Devil We Know,” “Spirited Away,” and “Paradise,” Lily & Madeline (who were raised Catholic) bring a sense of sacredness to their songs – a quality which doesn’t require a homily or argument to supplement it, but is by its own beauty a testament to all that we are and want to be.

In his Nobel Prize acceptance speech, William Faulkner said: “The young man or woman writing today has forgotten the problems of the human heart in conflict with itself, which alone can make good writing because only that is worth writing about, worth the agony and the sweat … until he does so, he labors under a curse. He writes not of love, but of lust … not of the heart, but of the glands.”

The same could easily be said of the music world. So many popular singers today write about life’s impulses and distractions, with little concern or vision for much more. But Lily & Madeliene’s sweet and sorrowful debut reclaims that wellspring of dignity in our restless hearts – and the result is nothing short of enchanting.