“The Third Way”: What American Conservatism Can Learn from Pope Francis 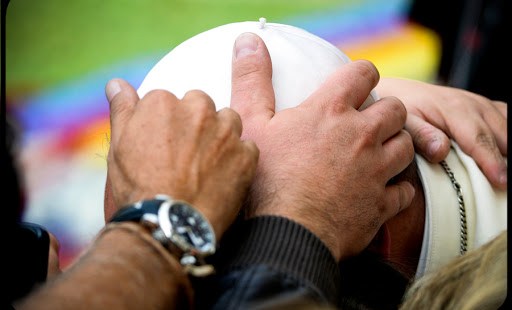 AFP/FILIPPO MONTEFORTE
People touch Pope Francis as he approaches the crowd after his visit at the San Rufino Cathedral in Assisi on October 4, 2013. Pope Francis visited Assisi, the Italian town that is home to his namesake St. Francis of Assisi. Pope Francis took his name from the saint who is revered around the world as a symbol of austerity, simplicity, concern for the poor and a love of the environment.  AFP PHOTO POOL / FILIPPO MONTEFORTE
Share
Print
Alberto González - published on 11/18/13

The Republican party has built a reputation for ineffective leadership and is losing influence. Pope Francis has shown in word and deed he really cares about people – and the world can’t stop talking about him.

Recent elections have shown how an increasing percentage of the American electorate is distancing itself from the Republican Party. The cause of this is not so much that the Democratic alternative has done much to rebrand itself; rather, the GOP has become a symbol of ineffective leadership, causing its voting base to either become lukewarm or abandon ship altogether. Meanwhile, Pope Francis is making headlines day after day – and not just in the Catholic press. Is there something to be learned from all this?

Since the beginning of his pontificate, Francis has made clear his mission to “go to the peripheries” and reclaim those who, for various reasons, have grown estranged from the Church. And, for that matter, he also seeks those who have never experienced the Church’s embrace. The secret to his success lies in one key element: the focus on the human person.

Before one can speak of matters of ideology, one must first be able and willing to show a genuine concern for the wellbeing of others. Francis has drawn the attention of the world – and in many cases, of those who would otherwise not pay any heed to the Successor of Peter – by stressing the message of charity, salvation, and an intimate relationship with the person of Jesus Christ. In making the other feel loved and cared for, the door to doctrine and catechesis swings open.

This is where American conservatives would be wise to take notes. Politics and public policy exist (ideally) for the development of the common good in temporal matters. And since politics are temporal in nature, the ability to communicate how policies impact people positively in a concrete (and even material) way is key – moreover, it should be an expectation. Republicans have spent the last decade or so wallowing in stagnation, having much to say about a tired ideological platform while having little to offer in terms of real solution to real problems. This, in turn, has created a vacuum that Democrats have been able to easily occupy through the promise of handouts and immediate gratification.

Perhaps, on the one hand, this is a sign of America’s weak political culture – one that is not so much guided by principles as by a pervasive entitlement mentality. But with unemployment being as high as it is, and the middle class struggling as a result, who could blame voters for supporting a party with bloated, statist band-aid fixes over a party that just doesn’t seem to care? As Pope Francis has shown, there must be a genuine interest in the welfare of the human person before more remote talk of ideology can have any effect. American conservatives would do well to start addressing the problems that plague the nation (and more local communities) in concrete terms – “This is what we propose; this is how it will benefit your community; this is why our opponents’ proposal falls short.”

Ultimately, the human society functions as a cohesive network of interdependent individuals working toward a common good. We are made for community, but moreover, we are made for love. And in this case, love is expressed by seeking the good of the other, and by having a desire to serve his needs. This is, broadly speaking, the duty of each and every person – but, in a more particular way, it is the vocation of those in public service. I, for one, would like to see this “third way” take shape before sounding the death knell for genuine conservatism in America – a conservatism that preserves our social institutions so that true progress can be made in addressing the challenges that lie before us.