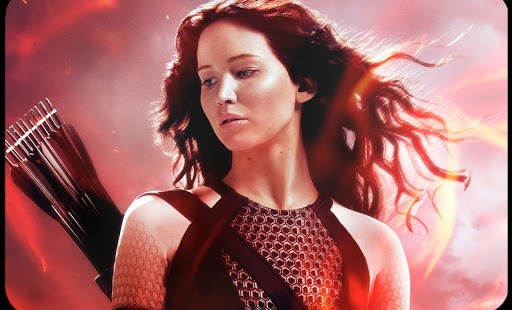 For the small percentage of the population that hasn’t pre-determined whether they will love or hate the film, ‘Catching Fire’ is a slightly above average offering.

Is it a futile effort to even try to review a movie like The Hunger Games: Catching Fire? After all, if you pay attention to the Internet (always a dicey proposition), then it’s clear that a significant portion of the population, mostly consisting of females under the age of twenty-five, has already determined they’re going to exalt and praise the film even if the finished production isn’t quite up to snuff. There’s also a smaller, though no less vocal, group who are equally determined to despise the movie even if it turns out to be a classic just because they hate anything once it gets too popular. And when all is said and done, neither group is going to give a flip what any reviewer has to say because they’re all going to go see Catching Fire no matter what, so the movie’s going to make a gazillion dollars regardless of whether it’s good or bad. Still, there must be a handful of folks out there who don’t fall into either of those two categories, so what I think I'll do is simply jot down a few quick impressions of the film geared towards very specific groups of people.

For those fans of the books who are actually concerned about the story: I have to admit, I haven’t actually read any of Suzanne Collins’s novels. That’s not out of snobbery (I haven’t finished Moby Dick yet either); it’s just that there’s a lot of stuff already on my reading list before I get to them. From my understanding, though, Catching Fire is a fairly faithful adaptation. After surviving the Hunger Games in the previous film, Katniss is back in District 12, dealing with post-traumatic stress disorder and trying to sort out her relationship with the hunky Gale. Alas, both these problems must be placed on the backburner as Katniss is forced to accompany her fellow survivor and second potential love interest, the hunky Peeta, on a victory tour of the Districts.

To complicate matters even further, the sinister President Snow has threatened to kill everyone Katniss loves if she doesn't start towing the Capital’s line instead of inspiring rebellion amongst the districts’ poor. Katniss can’t help herself, however, and her subsequent actions at various appearances further flame the feelings of discontent felt by the lower classes. To deal with Katniss once and for all, Snow signs off on a scheme that changes the rules for the upcoming 75th anniversary of the Hunger Games. For this special occasion, each district must provide two competitors culled from the small number of former victors, a rule which ensures that both Katniss and Peeta will once again find themselves fighting for their lives in a battle from which only one person is allowed to emerge alive. Mayhem, treachery, and more than a few surprises ensue. The story appears to hit most of the beats from the novel, so the majority of fans of the book should walk away pleased.

For those folks who actually care if the movie is any good: Even if you remove all the fan-mania surrounding the movie, Catching Fire actually turns out to be a slightly above average offering, in many ways a superior film than the first Hunger Games. Jennifer Lawrence is still better than the material she’s working with, of course, but overall the script is tighter, the pacing is better, and the supporting characters feel much less like cardboard cut-outs than they did previously (even Effie Trinket seems like a real person this time around). I’m not saying the movie will get too much Oscar consideration outside of costuming and set decoration, but Catching Fire is nevertheless a solid addition to the genre of dystopian futures that relies more on story than it does on its appeal to hormonally charged teenage girls. In other words, it ain't Twilight.

Speaking of which, for those males over the age of thirty: Despite what I just said, there is still plenty of female fan service involving strapping young men who lose their shirts at a moment’s notice, so dads and dates be warned. It wouldn’t be a big problem if the actors playing Gale, Peeta, and the new hunk on the block, Finnick, weren’t so blandly homogeneous, but they kind of are. Furthermore, there’s nothing really distinctive in their acting, making it difficult for viewers to tell them apart. (Perhaps in the next sequel, the filmmakers could dye each of their hair a different color to help us out a little bit.)

Oh, and about that ending I just mentioned, for those who enjoy resolution in their stories: this is not the movie for you. Catching Fire is blatantly structured as the Empire Strikes Back of the Hunger Games series (yes, I know Collins is primarily charged with ripping off the Japanese manga/film Battle Royale and the old Schwarzenegger flick, The Running Man, but who says she can’t borrow a little from George Lucas, as well?). So when the credits start to roll, they do so abruptly. Don’t be too shocked if you have a momentary reaction of, “Huh? Is that it? But what about…” as the movie ends.

For those who like a bit more to their stories than teen angst: the movie has it flaws. But along with the better script and production values, one of the main things which helps Catching Fire rise above them is the way it builds upon the underlying social themes established in the first film. Sure, it does so with the subtlety of a sledgehammer, but at least it makes the effort. Once again, the series addresses the disparity that so often rises between a country’s government and its common citizens, and the inevitable conflict that ensues. Also, like its predecessor, Catching Fire mercilessly mocks the world’s fascination with the bread and circuses of reality television.

But while it hits us over the head with such points, what really makes The Hunger Games series fascinating is what it doesn’t show. All dystopian films are warnings, but just what is it that The Hunger Games is warning us against? Well, like the first movie before it, Catching Fire depicts a world totally devoid of any reference to religion. Not only are there no churches, mosques, or temples of any kind, but nobody ever says a single prayer, no matter what horrible event happens to be transpiring. There may be no atheists in foxholes, but apparently there are in the domed arena of the Hunger Games. As depicted in these movies, American society has become what should be an atheist’s dream world, and yet it is a bleak place in which nobody in their right mind would ever want to live. Warning duly noted. Not bad for a movie aimed at a demographic whose primary concern is seeing shirtless hunks stare meaningfully at Jennifer Lawrence.