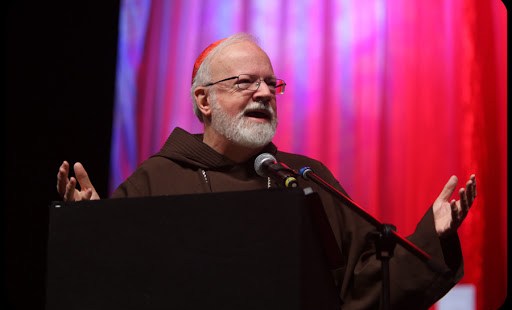 Cardinal Seán O’Malley explains the cultural trends that are discouraging marriage among young people and causing challenges to the the Church in the U.S.

Cultural trends discouraging marriage are among the biggest challenges to the Church in the U.S., says Cardinal Seán O’Malley, who also sees signs of renewal and hope among young people.

"Concerns about marriage – people not getting married, falloff in Mass attendance, (and the) challenge of catechizing the young Catholics" are some of the more troubling trends facing Catholicism in the U.S., the Archbishop of Boston said to CNA Nov. 11, during the general assembly of the national bishops’ conference in Baltimore.

Cardinal O’Malley is a member of the group of eight cardinals whom Pope Francis has asked to help reform the Roman Curia, as well as chairman of the U.S. bishops’ committee on pro-life activities.

The cardinal noted that "the whole notion of family is so undercut by the cohabitation mentality," and that these social trends are having a tremendous impact on the working-class communities "who were once the backbone of the Church."

"Half of the children born to that demographic are born out of wedlock," a statistic that Cardinal O’Malley said would have been "inconceivable" a few decades ago.

This shift away from the bearing of children within wedlock is the “biggest threat to marriage.”

Yet the sacrament of marriage is facing other challenges as well, he added.

"Part of the problems are economic" he commented, explaining that "our educational system is so expensive, people graduate from college or graduate school facing huge debts."

"If you have a $150,000 debt when you graduate law school, are you going to marry a girl that has a $130,000 debt and start off your marriage with over a quarter-million dollars’ debt?”

“So people are postponing marriage – are postponing a decision to go into the seminary or religious life – because they’re saddled under this tremendous debts which former generations didn’t have."

In addition, Cardinal O’Malley stated that the Church needs "better marriage preparation" and outreach to help young people recover an understanding of marriage.

The Church needs to "catechize our young people and instill in them a sense of vocation, and also to help them understand what courtship is about."

In combination with the misunderstanding of marriage, lack of attendance at Mass, and the shortcomings in the catechization of young people, the Church also faces many challenges posed by the “secularization of the culture,” he explained.

Despite all this, Cardinal O’Malley said, there remain cultural "signs of hope."

Within the pro-life movement, there are "more and more young people who are embracing the Gospel of Life" and becoming "part of the marches in Washington" in defense of human life.

Young people are also flocking to World Youth Day, “with more than 3 million young people there” at the latest gathering in Brazil, he reflected.

Cardinal O’Malley added that he is "very encouraged by the response of the world to our new Holy Father."

People around the world are showing "great enthusiasm for his message, and many people who have stepped away from the Church are beginning to look at the Church in a new light."

The Pope’s message is placing an "emphasis on our obligation to serve each other, especially the poor," and providing an example of "how we should take care of each other,” the Capuchin explained.

“Hopefully that will help them find the way back to the fold.”