The Holy Bones of the First Holy Father 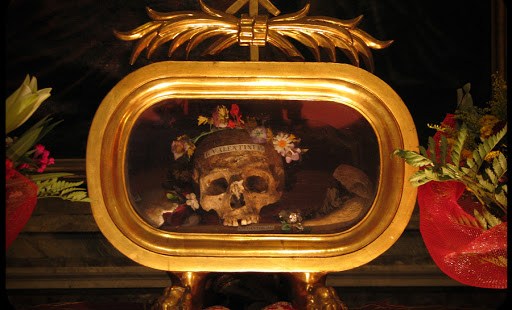 What sort of religion keeps dead people’s bones, puts them on display, and expects people to kiss them? Catholicism – and it’s awesome.

What sort of religion keeps dead people’s bones, puts them on display, and expects people to kiss them? This weekend’s news reminds the world that the veneration of relics is still very much part of the Catholic faith. As a fitting climax to the Year of Faith, Pope Francis put on display for the first time the bones of St. Peter, the first Pope.

The news headlines focused on the sensational, and many journalists asked the obvious questions, often missing the point and skimming over the facts to report superficially. There are some excellent questions that arise from the reports of St. Peter’s bones being produced: What are relics and why are they important to Catholics?  Why do Catholics kiss the bones of dead people? Are Catholics really so gullible as to believe in the authenticity of relics (we know they’re fake, right)? Could those bone fragments really be the remains of Peter the Apostle?

A relic is anything associated with a person who has been canonized as a saint or beatified as blessed. There are three categories of relics: a first class relic is some part of the person’s mortal remains. The relic could be a fragment of bone, hair, skin, or blood. The relic is taken when the body of the saint is exhumed as part of the canonization process.

A third class relic is a piece of cloth that has touched a first class relic. Third class relics are typically included as parts of mass produced prayer cards and items of devotion. A cloth will be touched to the first class relic, then cut up into many pieces so a large number of people can have physical contact with the saint.

A relic is “venerated” by either kissing it or kissing one’s fingers and touching the relic. This is done as part of religious services honoring the saint. Catholics believe that the physical world matters. When a person becomes holy, everything about them is touched by that holiness. Holiness permeates even the physical world.

Veneration of the saints began in the early church. When Christians were martyred, their remains were gathered up and honored. In 156 AD, the Christians in the city of Smyrna recorded what they did with the remains of their beloved bishop Polycarp, who had been killed: “We took up his bones, which are more valuable than precious stones and finer than refined gold, and laid them in a suitable place, where the Lord will permit us to gather ourselves together, as we are able, in gladness and joy and to celebrate the birthday of his martyrdom.”

Are Catholics gullible to believe in relics? Not really.  We assess the authenticity of relics as we would any historical claim. Some relics are fake; others are definitely genuine. The veracity of others still remains uncertain. For a relic to be venerated publicly, the owner must have official documentation called an “authentic.” The authentic is produced by the bishop when the relics are produced. The authentic can be checked by experts to ensure that it is genuine.

What about the relics of St. Peter that were displayed this weekend? The story of their discovery is a fascinating piece of detective work. We know that the great Basilica of St. Peter stands on what was once the side of the Vatican Hill. In the first century, that hill was the location of a cemetery. In the mid-fourth century, the Emperor Constantine commanded his engineers to carve away part of the hill and dump the infill to create a level platform on which to build a church. Constantine went to all that trouble so that his church might be centered on a particular tomb in the Vatican Hill cemetery. For three centuries, that tomb had been honored by Roman Christians as the tomb of St Peter.