The Most Important Catholic Republicans Since World War II 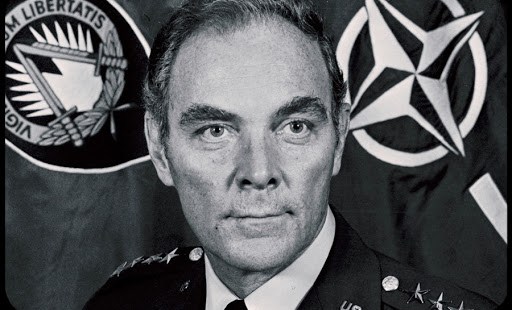 In his 2008 book, The Faithful: A History of Catholics in America, Boston College historian James M. O’Toole did a fine job of fleshing out the conventional U.S. Catholic story-line by emphasizing the role prominent lay men and women played in the Catholic experience in these United States. Yet there seemed to be something of a political filter at work in O’Toole’s perceptions, such that only the lamentable Joseph R. McCarthy got a mention among post-World War II Catholic Republicans notable in American public life.

Or to illustrate the point another way: the index to The Faithful lacks the following entries: Buckley, William F. Jr.; Clark, William P. Jr.; Flanigan, Peter M.; Haig, Alexander M. Jr.; Hyde, Henry J. This seems, not only odd, but not right (no pun intended).

Bill Buckley (+2008) ranks with Orestes Brownson as one of the most important lay Catholic intellectuals and publicists in American history. Bill Clark, who died in August, was one of Ronald Reagan’s closest confidants, national security adviser during the martial law period in Poland, and a key link in the conversation between Reagan and Pope John Paul II. Al Haig (+2010) helped hold the government together during the Watergate meltdown. Henry Hyde (+2007) was arguably the most influential Catholic legislator in the history of the U.S. House of Representatives.

And then there was Peter Magnus Flanigan, of whom the public knew far less than it did of these other giants. Yet Flanigan was an integral part of that group of Catholic World War II veterans who re-cast American conservatism, helped effect one of the great political realignments in American history, and made the Republican Party a more comfortable (if not necessarily permanent) home for Catholics who found themselves betrayed by the Democratic Party in its embrace of lifestyle libertinism and neo-isolationism.

It says something about the character of my friend Peter Flanigan that, when his children wanted to throw him a 90th birthday party this past June, Peter insisted that it be a “celebration of ideas,” not of him. So we gathered in Newport, R.I., to honor Peter by thinking with him about the state of the culture and the country. Roger Kimball of the New Criterion and I may have thought that we had gotten the proceedings off to a great start by exploring the cultural lava-flows beneath the surface of today’s politics. But when Princeton’s Robby George, who couldn’t be with us in person because of illness, nevertheless joined the party by Skype and played Peter two tunes on his banjo, Kimball and I knew we had been well and truly bested.

It was a marvelous evening, made all the more poignant retrospectively by Peter’s sudden death seven and a half weeks later. The obituaries noted his wartime service as an F-4 Wildcat pilot, his government work, and his business career as managing director of Dillon Read. But it was a Wall Street Journal editorial that best captured Peter Flanigan the man, the Catholic, and the citizen:

“Through the bright autumn of his years, Flanigan turned to education philanthropy. His unstinting focus was on giving poor kids better school options. He sat on the board of the Alliance for School Choice and founded Student Sponsor Partners, a privately funded school-voucher program … Peter Flanigan used his political skills and personal fortune to put in motion a small movement that has since grown into an army of benefactors working across the U.S. to give the country’s poorest kids an educational break.”

Peter once said that his goal for the children he served by his philanthropy was “educational freedom.” That vision, and the generosity that brought the vision to life, was shaped by Peter’s deep Catholic faith, his confidence in Catholic schools, and his appreciation of Catholic social doctrine—especially the principle of subsidiarity, with its cautions against turning citizens into wards of the state. Having been given much, he gave much in turn.

And although Peter Flanigan will be sorely missed, his memory will be blessed, especially by the kids he gave a chance.