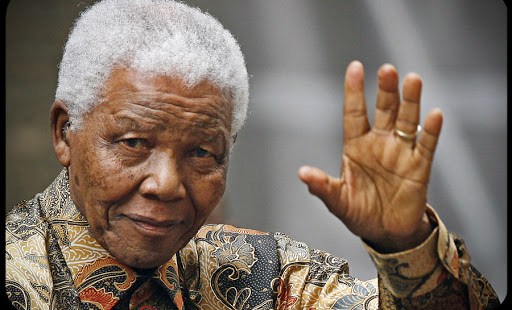 South Africa’s icon of non-violent resistance against Apartheid and first president of a reconciled country, Nelson Mandela is dead at the age of 95. He served twenty-seven years in prison, from 1962 until 1990, to emerge as the leader of the movement to end the systematic racial discrimination that had characterized South African society for generations, and achieve racial reconciliation.
For his work toward non-violent reform and national reconciliation, Nelson Mandela was awarded the Nobel Prize for Peace in 1993, together with former president F.W. de Klerk. Mandela served as president from 1994 until 1999, after successfully leading negotiations to end Apartheid and hold a multi-racial general election.
As word of Mandela's death spread, current and former presidents, athletes and entertainers, and people around the world spoke about the life and legacy of the former South African leader. From Harlem to Hollywood, Paris to Beijing, people hailed Mandela's indomitable courage in the face of adversity as an inspiration for all.
In a testament to his universal appeal, political leaders of various stripes joined critics and activists in paying tribute to Mandela as a heroic force for peace and reconciliation. Some knew Mandela personally while many only knew him from afar, but they shared how they drew inspiration from his strength and looked to live his message of continuing the struggle against social injustice and for human rights.
"He no longer belongs to us. He belongs to the ages", said U.S. President Barack Obama, who shares with Mandela the distinction of being his nation's first black president.
Former U.N. Secretary General Kofi Annan said the world had lost "a visionary leader, a courageous voice for justice and a clear moral compass". Both Annan and Archbishop Desmond Tutu were part of Mandela's group of statesmen known as The Elders. "God was so good to us in South Africa by giving us Nelson Mandela to be our president at a crucial moment in our history", Tutu said. "He inspired us to walk the path of forgiveness and reconciliation and so South Africa did not go up in flames".
President Xi Jinping of China, which supported apartheid's opponents throughout the Cold War, praised Mandela's victory in the anti-apartheid struggle and his contribution to "the cause of human progress. "For Chinese rights activists, Mandela's death served as a reminder that one of their own symbols of freedom, Nobel Peace prize laureate Liu Xiaobo, remained imprisoned by Chinese authorities. "This moment magnifies how evil the current regime is", Beijing activist Hu Jia said.
"Nelson Mandela set the standard for all revolutionaries past, present, and future: have a righteous cause, fight with dignity, and win with grace", said actor and E Street band guitarist Steven Van Zandt, who in 1985 recruited performers to record "Sun City," an anti-apartheid album.
Former U.S. President Jimmy Carter, who had personal connections with Mandela, said the people of South Africa and human rights advocates around the world had lost a great leader. "His passion for freedom and justice created new hope for generations of oppressed people worldwide", Carter said.
Prince William and his wife, Kate, were attending the London film premiere of "Mandela: Long Walk to Freedom" when Mandela's death was announced. "We were just reminded of what an extraordinary and inspiring man Nelson Mandela was", William said.
"As we remember his triumphs, let us, in his memory, not just reflect on how far we've come, but on how far we have to go," said the U.S. actor Morgan Freeman, who portrayed Mandela in the 2009 film, "Invictus".
In New York City's Harlem neighborhood, artist Franco Gaskin, 85, stood before a mural featuring Mandela he had painted on a storefront gate almost 20 years ago. He remembered a Mandela visit there in 1990. "It was dynamic, everyone was so electrified to see him in Harlem", Gaskin said. "I idolized him so much. He leaves a legacy that all of us should follow".