Why Is Pope Francis TIME Magazine’s Person of the Year? 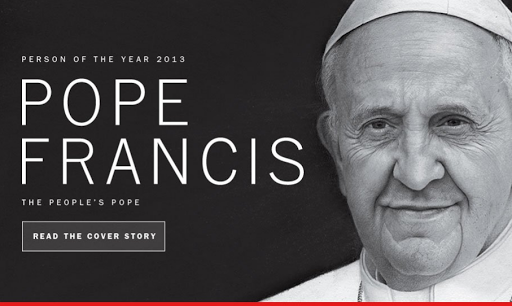 While all Catholics rejoice in the widespread popularity of Pope Francis, many Catholics are also dubious of the motivation and manipulation of his image and message by those who are enemies of the Catholic church.

At the end of every year
Time magazine produces their choice for person of the year. This year Pope Francis wins the prize. Edward Snowden, the technician who exposed government snooping was the runner up.
What does the choice of Pope Francis reveal about the media masters who made the choice?
This article from the
Huffington Post shows how many thought Mr Snowden should have been chosen, while
London’s Daily Telegraph quotes the
Time magazine writers with the tired angle that Pope Francis has reformed the legalistic, hide bound church of Benedict XVI and John Paul II: “People weary of the endless parsing of sexual ethics, the buck-passing infighting over lines of authority when all the while (to borrow from Milton), ‘the hungry Sheep look up, and are not fed.’ In a matter of months, Francis has elevated the healing mission of the church—the church as servant and comforter of hurting people in an often harsh world—above the doctrinal police work so important to his recent predecessors.”
The Time magazine writers reflect the sentimental spirit of the age: that there is nothing important about doctrine and discipline, but everything important about being nice and friendly. That Christians are often perceived as being legalistic, harsh and exclusive cannot be denied, but it is in the interests of the enemies of the Christian faith to exaggerate the alleged harshness of Pope Benedict XVI and Bl. Pope John Paul II while downplaying the tough words of Pope Francis.
While all Catholics rejoice in the widespread popularity of Pope Francis, many Catholics are also dubious of the motivation and manipulation of his image and message by those who are enemies of the Catholic church. Because of his warm and welcoming style, Pope Francis is being hailed as a progressive, and those who oppose the Catholic faith will use Pope Francis to promote their own agenda.
The Pope’s human warmth and joyful message is being portrayed as no more than human kindliness and the sort of bland inclusiveness beloved by secularists. At the same time those who disagree with the fullness of Catholic teaching ignore the heart of Pope Francis’ message–which is a call for all people to turn away from their sin and seek a loving and living encounter with Christ the Lord.
We should therefore ask why Pope Francis is Time Magazine’s Person of the Year. Is it part of the continued attempt to embrace the Pope’s method while ignoring his message? In this way do the media negate the power of the message with a smile and betray the man with a kiss? If this is what is going on, one hopes that it is being done unconsciously by people who simply don’t know any better.
However, instead of focussing on the negative we applaud Time Magazine’s choice of Pope Francis for Person of the Year, and take this opportunity to explain why he is so popular.

Pope Francis is Person of the Year because he is a fulfilled person. He shows us what it means for a human being to reach his full potential, and this is enormously attractive. Catholic theology teaches that Jesus Christ was God incarnate and therefore the perfect human being and that through the practice of the Catholic faith one may be transformed into a unique image of Christ himself. The person who is fully completed in Christ radiates what St Paul named in the fifth chapter of his epistle to the Galatians, the fruit of the Spirit.
The fruit of the spirit is love, joy, peace, forbearance, kindness, goodness, faithfulness, gentleness and self-control. The Catholic Church teaches that these qualities are not simply the result of trying hard to be a nicer, kinder and more patient person. They are not the result of natural effort, but the result of a supernatural gift. They come to completion in a unique way as each individual co operates with the work of God in his life.
These fulfilled human beings are what Catholics call “saints” and what the New Testament calls “God’s handiwork.” More importantly than Pope Francis being Person of the Year is that he is a Person created in God’s image and completed in Christ. As such he shows us not just a nice, grandfatherly man: he shows us the destiny of all persons who embark on the adventure of following Christ the Lord.
Fr Dwight Longenecker is the parish priest of Our Lady of the Rosary Church in Greenville, South Carolina. Visit his blog, browse his books and be in touch at dwightlongenecker.com