Church Teaching on Immigration is a ‘Humane Position’ 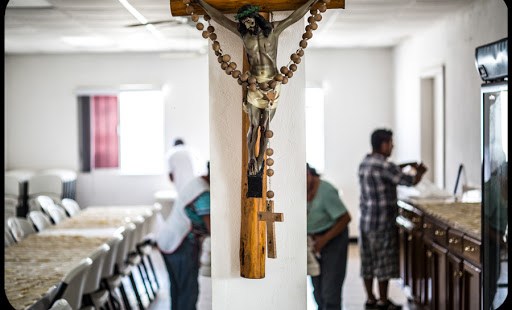 “For us, as Catholics – following the example of Jesus in the Gospels – there is no way that we cannot be in favor of the immigrant,” said Archbishop Gustavo Garcia-Siller of San Antonio.

The Church’s welcoming stance on immigration is rooted in the person-centered recognition of human dignity, said one of the leading Hispanic bishops in the U.S. Church.

“For us, as Catholics – following the example of Jesus in the Gospels – there is no way that we cannot be in favor of the immigrant,” said Archbishop Gustavo Garcia-Siller of San Antonio.

The Catholic position on immigration is a “humane position,” he told CNA in a November interview, “humane, and therefore very divine”

The archbishop spoke at the annual fall meeting of the U.S. Conference of Catholic Bishops in Baltimore. Archbishop Garcia-Siller is himself an immigrant from Mexico to the United States, arriving in 1980 and becoming a U.S. citizen in 1998. He currently serves on the U.S. bishops' Committee on Migration.

At its root, the archbishop said, the issue of immigration “is about people” because it “deals with human beings” and the “dignity of the human persons” who leave their homes to settle in a new country.

The Church sees “the faces of many who are suffering, and are divided as families” and seeks to reconnect those families with their loved ones, he said. In addition, the Church asks that Catholics reach out to ease the suffering of immigrants, “not because they are citizens but because God created them.”

Archbishop Garcia-Siller lamented that “many people do not understand” the Church's teachings on immigration. Selfish interests, a lack of knowledge, and misinformation about the realities of immigration have led to a poor understanding of both the situation faced by immigrants and “the values that the Gospels present,” he said.

There is also an unfortunate tendency to overlook or forget the history of the United States, the archbishop said.

“Our country was founded with immigrants,” he pointed out. “Immigration is part of the reality of the United States.”

The Catechism of the Catholic Church teaches that nations have the obligation, as much as they are able, “to welcome the foreigner in search of the security and the means of livelihood which he cannot find in his country of origin.”

The Church also holds that nations have the right and duty to ensure border security and law enforcement that is both just and humane for the common good.

In recent months, the U.S. bishops have been emphasizing the need to increase lawful means for immigrants to enter the country, in order to focus enforcement on those who pose a threat to public safety, including smugglers, human traffickers and terrorists.

The U.S. Conference of Catholic Bishops issued a 2003 pastoral letter, “Strangers No Longer: Together on the Journey of Hope,” laying out several policy goals for immigration reform.