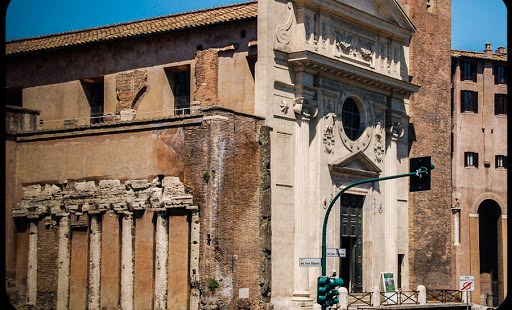 While six million people visited the original tilma in Mexico for the feast last week, just about 50 worshippers showed up to Rome’s Guadalupe shrine.

Several hundred yards from the heart of the ancient forum, devotees are gathering in the run-down Basilica of San Nicola in Carcere today where one of the first copies of the Virgin of Guadalupe is on display.

“Practically, this icon of our lady isn't the original but the second icon of Our Lady that was brought with some difficulty to Italy,” recounts Fiorella Silvestri after the 11a.m. Mass. She's one of several dozen core members of the prayer group that meets every twelfth of the month at the shrine.

The Dec. 12 feast of Our Lady of Guadalupe brings more of a crowd than usual – there are nearly 50. At the same time, as many as six million people are making the pilgrimage to the original back in Mexico while a 20,000 man-strong security force is guaranteeing their safety.

Here, the basilica's lone young doorman is distracted as he assembles a tarpaulin-covered nativity scene in a dark corner of the church.

This is Rome's shrine to Our Lady of Guadalupe.

With its humble appearance and the peeling paint on the stone and plaster walls, this is another of Rome's great treasures. And as many of the myriad treasures that find a home in this city, not many know about it.

The image of Our Lady – which is believed to be the work of the 18th century maestro Miguel Cabrera – was brought to Rome by two Jesuit priests around 1770 and placed in St. Mary of the Vineyards Church at the base of the forum's Capitoline Hill. Several years later, it was moved 100 yards down the hill to San Nicola where it remains.

The small basilica itself was built using the ruins and foundations of nearby pagan temples. The eclectic columns holding up the ceiling are the originals, some graffitied with millennial Latin scribblings.

Construction on the church started just 68 years after the image of Our Lady miraculously appeared along with Castillian roses in Juan Diego's tilma in 1531.

The copy that now adorns chapel altarpiece is just small, measuring no more than 2 by 3 feet at most. The original at Mount Tepeyac just outside Mexico City is imprinted on a cape made of plant fibers measuring 5.5 by 4.6 feet.

Whereas in Mexico City, Our Lady is visited by between 18 and 20 million pilgrims a year. At San Nicola, she's tucked away in a side altar and sees the few visitors that trickle through to see the ancient Roman ruins accessible through the crypts of the Church.