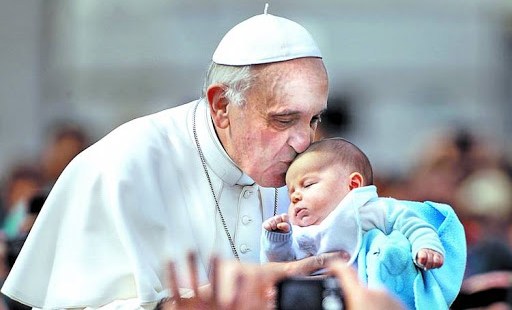 Touching on subjects ranging from Marxism to women Cardinals, Pope Francis clarifies parts of ‘Evangelii Gaudium’ and responds to critics.

A new interview with Pope Francis by La Stampa and Vatican Insider was released this last weekend. After a few questions about Christmas, Pope Francis clarifies certain sections of Evangelii Gaudium, as well as responds to some critics. He touches on a wide range of topics including women Cardinals, communion for divorced and remarried Catholics, and Marxism.

Here are the nine most important quotes:

What Christmas means for him

“It is the encounter Jesus. God has always sought out his people, led them, looked after them and promised to be always be close to them. The Book of Deuteronomy says that God walks with us; he takes us by the hand like a father does with his child. This is a beautiful thing. Christmas is God’s meeting with his people. It is also a consolation, a mystery of consolation. Many times after the midnight mass I have spent an hour or so alone in the chapel before celebrating the dawn mass. I experienced a profound feeling of consolation and peace. I remember one night of prayer after a mass in the Astalli residence for refugees in Rome, it was Christmas 1974 I think. For me Christmas has always been about this; contemplating the visit of God to his people.”

The meaning of Christmas for people today

“It speaks of tenderness and hope. When God meets us he tells us two things. The first thing he says is: have hope. God always opens doors, he never closes them. He is the father who opens doors for us. The second thing he says is: don’t be afraid of tenderness. When Christians forget about hope and tenderness they become a cold Church, that loses its sense of direction and is held back by ideologies and worldly attitudes, whereas God’s simplicity tells you: go forward, I am a Father who caresses you. I become fearful when Christians lose hope and the ability to embrace and extend a loving caress to others. Maybe this is why, looking towards the future, I often speak about children and the elderly, about the most defenceless that is. Throughout my life as a priest, going to the parish, I have always sought to transmit this tenderness, particularly to children and the elderly. It does me good and it makes me think of the tenderness God has towards us.”

“With all the food that is left over and thrown away we could feed so many. If we were able to stop wasting and start recycling food, world hunger would diminish greatly. I was struck by one statistic, which says ten thousand children die of hunger each day across the world. There are so many children that cry because they are hungry. At the Wednesday General Audience the other day there was a young mother behind one of the barriers with a baby that was just a few month s old. The child was crying its eyes out as I came past. The mother was caressing it. I said to her: madam, I think the child’s hungry. “Yes, it’s probably time…” she replied. “Please give it something to eat!” I said. She was shy and didn’t want to breastfeed in public, while the Pope was passing. I wish to say the same to humanity: give people something to eat!”

Response to critics of his economic statements in Evangelii Gaudium

“The Marxist ideology is wrong. But I have met many Marxists in my life who are good people, so I don’t feel offended. […]

“There is nothing in the Exhortation that cannot be found in the social doctrine of the Church. I wasn’t speaking from a technical point of view, what I was trying to do was to give a picture of what is going on. The only specific quote I used was the one regarding the “trickle-down theories” which assume that economic growth, encouraged by a free market, will inevitably succeed in bringing about greater justice and social inclusiveness in the world. The promise was that when the glass was full, it would overflow, benefitting the poor. But what happens instead, is that when the glass is full, it magically gets bigger nothing ever comes out for the poor. This was the only reference to a specific theory. I was not, I repeat, speaking from a technical point of view but according to the Church’s social doctrine. This does not mean being a Marxist.”

The importance of ecumenism

“Yes, for me ecumenism is a priority. Today there is an ecumenism of blood. In some countries they kill Christians for wearing a cross or having a Bible and before they kill them they do not ask them whether they are Anglican, Lutheran, Catholic or Orthodox. Their blood is mixed. To those who kill we are Christians. We are united in blood, even though we have not yet managed to take necessary steps towards unity between us and perhaps the time has not yet come. Unity is a gift that we need to ask for.”

“One must govern with boldness and prudence. I spoke about baptism and communion as spiritual food that helps one to go on; it is to be considered a remedy not a prize. Some immediately thought about  the sacraments for remarried divorcees, but I did not refer to any specific cases; I simply wanted to point out a principle. We must try to facilitate people’s faith, rather than control it. Last year in Argentina I condemned the attitude of some priests who did not baptise the children of unmarried mothers. This is a sick mentality. […]

“The exclusion of divorced people who contract a second marriage from communion is not a sanction. It is important to remember this. But I didn’t talk about this in the Exhortation. […]

“The synodality of the Church is important: we will discuss marriage as a whole at the Consistory meetings in February. The issues will also be addressed at the Extraordinary Synod in October 2014 and again at the Ordinary Synod the following year. Many elements will be examined in more detail and clarified during these sessions.”

On the relationship between Church and State

“The relationship needs to be parallel and convergent at the same time. Parallel because each of us has his or her own path to take and his or her different tasks. Convergent only in helping others. When relationships converge first, without the people, or without taking the people into account, that is when the bond with political power is formed, leading the Church to rot: business, compromises… The relationship needs to proceed in a parallel way, each with its own method, tasks and vocation, converging only in the common good. Politics is noble; it is one of the highest forms of charity, as Paul VI used to say. We sully it when we mix it with business. The relationship between the Church and political power can also be corrupted if common good is not the only converging point.”

He has no plans to appoint women as Cardinals

“I don’t know where this idea sprang from. Women in the Church must be valued not “clericalised”. Whoever thinks of women as cardinals suffers a bit from clericalism.”

He did not expect to be elected Pope

“No I didn’t expect it. I never lost my peace as the number of votes increased. I remained calm. And that peace is still there, I consider it a gift from the Lord. When the final scrutiny was over, I was taken to the centre of the Sistine Chapel and asked if I accepted. I said I did and that I had chosen the name Francis. Only then did I walk away. I was taken to the next room to change (my cassock). Then, just before I made my public appearance, I knelt down to pray for some minutes in the Pauline chapel along with cardinals Vallini and Hummes.”