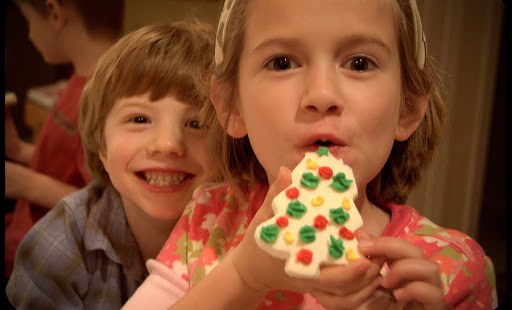 You’re not alone! It’s a crazy time of year for everyone. Now what was I supposed to get for our parish’s Giving Tree again?

This Sunday was Gaudete Sunday – or, as my five year old calls it, “Pink Candle Sunday” (which is better than the six year old’s comment, which was a shocked observation that “Father is wearing a pink dress – like a girl!”).  I’d be more discouraged by the assessment were it not for the fact that church is the only place the kids see advent candles, as Casa de Donaldson has none this year.

Side note: If you are waiting until the beginning of the second week of advent to frantically visit not one, but two local Catholic bookstores in search of candles, be prepared for disappointment. Also, spray painting white candles purple and pink will end badly. Not that I’d do anything like that.

After the appearance of Fr. Pink Robes (vestments, children – vestments!), the baby started yelling at the top of her lungs, and so ended my attendance at Gaudete Sunday. I spent the rest of it in the atrium, trying to keep Baby Sticky Fingers out of the gifts already under the parish Giving Tree (not yet under the tree: our family’s contribution, because either the baby or the dog ate the tag we’d picked up, and now I can’t remember if we’re to be buying for a 6-year-old girl or a 16-year-old boy).

This morning, as my first-born son (who is usually noted for a patience that exceeds what is typical for a boy of eight years) yelled at one of his brothers, “Do you think it would kill you to practice patience? Like me?”, I thought about all the advent parenting fails I’d seen this season. Even before we got to Pink Candle Sunday, the aforementioned eight-year-old, who is not only tremendously patient, but also a decent theologian for the pre-teen set, turned to me blank-eyed and asked, “Advent? What’s advent?” when I told him we should probably hold off decorating the Christmas tree. At least until the Thanksgiving table was cleared off, anyway.

The irony was not lost on me when, one day last week, I stopped to look in our empty manger on the credenza. It’s a fairly large manger, about a foot long, and we keep a jar of pine straw next to it. As the kids do good deeds and acts of service, they take a piece of pine straw out of the jar and lay it in Baby Jesus’ bed, the idea being that they’re given an outward symbol of what’s supposed to be going on inwardly.

That lesson was obviously lost on them, as the manger was full to overflowing with pine straw. I knew there was no one but my band of screaming savages who had been filling it.  Clearly, they’d all been grossly overestimating the impact of their good deeds, whatever they considered them to be.

I called the kids down to the table for some brainstorming and character building in the form of coming up with a list of gift ideas for grandparents, aunts, uncles, and siblings. I talked about how the actual gift itself wasn’t the point, but rather that we were so excited about God’s gift to us, we wanted to echo that giving. They nodded solemnly and stared thoughtfully at the ceiling. There was a moment of silence that I was certain was going to precede some genuinely lovely gift ideas.

“No, I’LL have to help her put it together!” angrily shouted another one of my advent-filled progeny.

I sighed heavily and glanced at the overflowing manger. My oldest followed my gaze and snorted to herself. She looked at me, “Well, at least we don’t have to think of a present for the Giving Tree at church this year,” she offered helpfully.

I looked at her. “We don’t? Yes we do. I just can’t remember if it’s a six-year-old girl or a sixteen-year-old boy. Hey, maybe a Lego Star Wars kit would appeal to either.” My daughter shook her head, full of smug wisdom.

“You pulled a tag that said box of cookies for Epiphany party at the homeless shelter, remember? Because you knew you wouldn’t mess that one up.”

I may have failed to convey the meaning and symbols of advent to my kids this year, but I will not mess up bringing cookies for the Epiphany party at the homeless shelter. Oh no. Not this year.