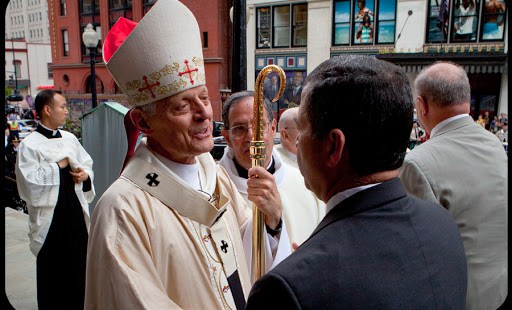 Americans have had an influential role in the Vatican in recent years, an influence that continues with new appointments by Pope Francis.

American prelates have featured prominently in Pope Francis’s reconfiguration of the Roman Curia. Among them are Cardinal Seán O’Malley, Archbishop of Boston, who is one of eight cardinals serving on the Pope’s personal advisory council. Cardinal Daniel DiNardo of Galveston-Houston, who was elected vice-president of the USCCB last month by his peers in the American episcopate, also enjoys close ties to the Roman Pontiff. Cardinal Raymond Burke, who was appointed by Benedict XVI as head of the Apostolic Signatura (the Church’s highest court of canon law), has been yet another decisive American figure in the Vatican, not only in that capacity, but also as one of two American members (the other being Cardinal Justin Rigali of Philadelphia) of the Congregation for Bishops – the curial body responsible for making recommendations to the Pope on episcopal appointments around the world.

Yesterday, the Vatican announced Pope Francis’s latest changes to the makeup of the membership of the Congregation. Among them is a new addition to the list of high-ranking American prelates within the Vatican: Cardinal Donald Wuerl of Washington, who has become the sole American within the influential Congregation, as neither Rigali nor Burke saw a renewal of their membership. While Wuerl will remain as Archbishop of Washington, he will find himself Rome-bound on a much more frequent basis now. Additional drops from the Congregation include two Italians – Cardinal Maura Piacenza and Cardinal Angelo Bagnasco.

Francis also added to the Congregation, in addition to Wuerl, Archbishop Nichols of Westminster, Cardinal Robles Ortega of Guadalajara, Cardinal Braz de Aviz, and Archbishops Parolin, Stella, and Baldisseri. It remains to be seen how these new appointments might impact the sorts of episcopal appointments that are made for the various dioceses throughout the Catholic Church worldwide.