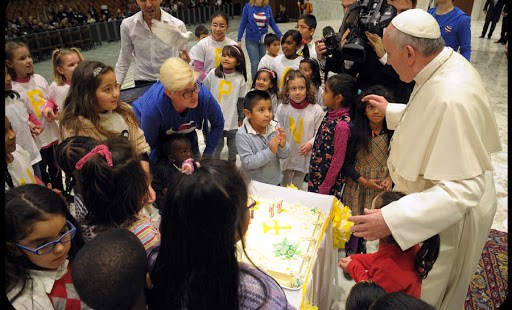 Everyone sang a birthday song to the Pope before going in to breakfast together at the residence.

December 17 is the 77th birthday of Pope Francis, who wanted to celebrate the day in the familial setting of his St. Martha residence.

The Pope asked that those who live and work at the residence join him for the daily 7 a.m. mass there. Cardinal Angelo Sodano, dean of the College of Cardinals, concelebrated mass with the Pontiff on behalf of the entire College.

During the homily he preached on today’s gospel reading containing the genealogy of Jesus, Pope Francis took the opportunity to remember the names of some of the staff who were present.

Pope Francis then followed his usual custom after mass of greeting everyone in attendance. Today, the Papal Almoner, Msgr. Konral Krajewski, presented four homeless people who live in the Vatican area to the Pontiff.

Everyone sang a birthday song to the Pope before going in to breakfast together at the residence.

The Secretary of State, Msgr. Pietro Parolin, has sent his best wishes and greetings on behalf of everyone in his office.

Several other celebrations have been held throughout Rome in honor of the the Pontiff. A local Catholic center for youth, the “Centro San Lorenzo” has organized a day of prayer and adoration for Pope Francis. The 24 hour vigil will take place just down the road from the Vatican, beginning at midnight on Dec. 16 and ending at the same hour on the seventeenth.

Earlier in the week, the children and staff of the Vatican’s Santa Marta clinic held a birthday party for the Pope, complete with a birthday cake, candles, song and even the gift of a sweater.

Others have sent the Pontiff a four-foot-tall birthday card bearing the image of Mary under her title “Untier of Knots.” In the 1980s, the then Jorge Bergoglio saw this baroque image when he was a student in Germany and brought the devotion back to South America.

Journalists dedicated to special coverage of Vatican activities, known as “vaticanistas,” will gather on Tuesday evening in Rome’s “Campo di Fiori” to celebrate in honor of Pope Francis.

Luis Avellaneda, the secretary of Pope Francis’ childhood church in Buenos Aires, told Vatican Radio that although there are no specific plans for a celebration there, “certainly in Masses of the day we will pray. We will pray for all the intentions of the Holy Father, who for us is very far away: we're at the end of the world … But we are very close to the heart of the Holy Father.”

Another special birthday surprise for the Pope came in the form of a victory for his favorite soccer club, “San Lorenzo de Almagro.” Upon being told about their win, one Italian newspaper reports that Pope Francis exclaimed, “what a joy!”

Some players and managers of the soccer club hope to present Pope Francis, who is also their chaplain, with their newly-won league championship trophy.