Why Pope Francis Hangs a Child’s Drawing of St. Francis of Assisi in His Room 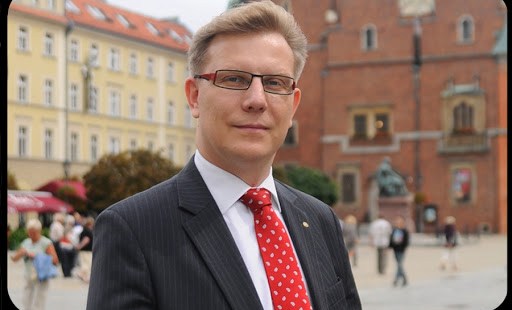 Ten-year-old Peter died of cancer just a few weeks before his fellow patients got to meet Pope Francis, but he made a gift for the Pope before he died.

We saw it in the telecasts prior to the conclave: the bare, simple apartment in Casa Santa Marta, where the newly elected Pontiff would spend his first few nights while the Apostolic Palace would be prepared for him. This is now the permanent living quarters of Pope Francis. His style, which is limited to the bare essentials and marked by simplicity, makes us think of anything but sumptuous furnishings and collectors’ paintings, perhaps made with special techniques and bearing some kind of value on the market. But on one of those walls, one might see a special picture depicting St. Francis. This image is of inestimable value, because that picture is the testament of a child who fought against a serious form of cancer, but did not win. To retrace the emotions of that particular gift and meeting with Pope Francis is Krzysztof Bramorski, a young Polish lawyer active in volunteer work for a foundation that takes care of children with cancer.

Krzysztof, how was your connection with the foundation born?

I can say that it is a connection that I inherited from my father who, over twenty years ago, was invited by Professor Jaworska, director of the clinic, to become involved in this charitable cause. Thus, in the following years, my father became the first Chairman of the Executive Board and later Chairman of the Board for the foundation. In 1994, I started to raise funds for the purchase of machinery required for therapy, and since 2006, my law firm has organized an annual charity auction, the proceeds of which go toward the purchase of equipment needed for treating tumors.

How did this visit to the Holy Father come about, and what were your expectations?

In 2004, I organized our children’s first papal visit with John Paul II in the Vatican, and during Benedict XVI’s trip to Poland, I organized a meeting with him in Krakow, in the Basilica of Divine Mercy. After the election of Pope Francis, I tried to ask for a meeting for these children and, with the help of Monsignor Celestino Migliore – the nuncio in Warsaw – I managed to get it. Archbishop Migliore called me one day to tell me that the Pope would receive us in a special audience just two weeks later. The timeframe was very tight, but we could not lose this unique opportunity for the children. We quickly organized a trip which was attended by twenty-one children and teenagers between the ages of 2 and 18, all of whom suffer from the most severe forms of cancer and leukemia. The children were accompanied by their doctors and families.

What does it mean for these children, who are enduring the difficult experience of their illnesses, to meet the Pope?

This visit represented for them a "journey to the miracle," which they eagerly awaited with joy. During this trip, they prayed at the tomb of John Paul II prior to meeting with Francis, who offered his prayers and his blessing. Upon introducing ourselves to the Holy Father, I pointed out, in the words of Pope Wojtyła, that these children had come from Poland – from a faraway land – but that they were always near in faith and in the Christian tradition; that we carried the prayers of so many sick children – their pain, their fear, and their hope to regain health and to have a long life full of joy. Living with children who have no future is an extremely moving experience; I remember a story from 2004 that occurred while waiting in the Apostolic Palace for our audience with Pope John Paul II. A boy aged about 14 or 15, after seeing that I was talking to a Swiss guard, asked if it was possible to learn a foreign language in a year. I told him yes, that he was young and he was a quick learner. I promised to give him a book that he could begin to read during the return trip. Then I wondered why he insisted so much on learning a language in one year. A doctor provided the answer: that boy knew how much longer he had to live. But the amazing thing is that this boy is alive today, and he can learn as many languages as he wants!

What was the children’s impression on encountering this Pope?

Francis is a very direct and frank man – this we already knew. He does not seek to “fill a role” – he simply is who he is, and this is something that the children understood well. For his part, Pope Francis immediately understood the expectations of those children: to feel his presence, his closeness, his prayer. I got to stay for the whole meeting at the Pope’s side, and I saw clearly how he prayed with each one of those children and the love with which he blessed them. The children were very much themselves during this encounter, too, and so it seemed so natural that Pope Francis sat still for a long time as each of them had their picture taken with him!

We come to the picture of Saint Francis – a special gift for the Pope, especially given the story behind the work…

The image, which was done as a collage, features a smiling St. Francis surrounded by sheep, goats, a wolf, butterflies, and colorful birds, all in perfect harmony. That picture was specially made for the Pope by Peter, a ten-year-old boy who, unfortunately, died a couple of weeks prior to the meeting with Francis. I told this story upon presenting the gift to the Holy Father who, having received the picture and become visibly touched by the story, asked one of his aides to take it into his apartment. It was a touching demonstration of Pope Francis’s great sensitivity.

You went from being a lawyer to working as a promoter of charitable initiatives. What does it mean to live this experience alongside pain and, sometimes, unfortunately, even death?

I find that one who visits a hospital for children with cancer and leukemia cannot go away without thinking, “I must do something.” There are some very difficult moments, such as when you come back to the hospital to find another familiar face now missing forever, but it is an experience in which children, in a special way, make clear to us adults the meaning of life and death. They see things in a simple and innocent way, as they are, without complicating everything as we adults tend to do. Children who know that they will soon die from do not ask “why”, but instead wonder what life will be like “on the other side.” It is a sign that we have much to learn from them about life, death, and the truest sense of our faith.