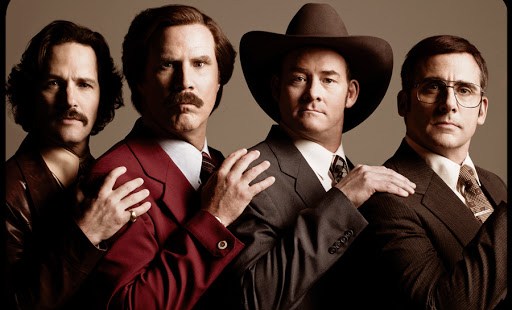 If the first Anchorman tickled your funny bone, or if you really just need a couple hours of mindless fun to take the edge off, then give Anchorman 2 a shot.

Can we talk about film critics for just a moment and why so many people probably hate us? Last week, at a promotional screening of the latest Hobbit movie, one of my peers in the press section stood facing the audience before the movie began and announced quite loudly that he had no interest whatsoever in seeing the film we were all about to watch. Over the course of the movie, he then proceeded to yawn at meticulously timed thirty minute intervals with a zeal that can only be described as heroic.

The same guy was back again this week for Anchorman 2: The Legend Continues. Once more, he took to his feet before the gathered crowd, this time declaring that anyone in the country who actually wanted to see this movie instead of one of the smaller critically acclaimed releases coming out at the same time no doubt belonged to that ever growing horde of illiterate morons (his actual terminology was a bit stronger and unable to be printed here) who were not only the bane of good cinema, but probably the cause of every other problem society currently faces. After valiantly managing to avoid cracking a single smile throughout most of the film, he left about twenty minutes before the credits rolled. Now I haven't been able to learn just yet for whom this particular critic writes, but I'm sure that his published review of Anchorman 2: The Legend Continues will be fair and evenhanded.

Sarcasm aside, and temporarily overlooking the obvious fact that my esteemed colleague seems to suffer from a severe personality disorder, I do actually sympathize a bit with his frustration. After all, part of a movie critic’s responsibility is to utilize his (supposed) knowledge of the history and process of cinema to inform others about a particular film's worth, not just as entertainment, but as a piece of art. And when a critic finds a movie that succeeds as art, that has some kind of cultural, societal, or political relevance, or that touches on some truth regarding the human condition, then that critic does his best to write about said movie in such a way as to inspire others to want to see it and hopefully find the same qualities in it for themselves.

That’s why, over the past couple of months, in between reviewing the latest blockbusters, I've managed to slip in some kind words for artfully constructed films like 12 Years A Slave and Inside Llewyn Davis. I think they're good art; I think good art is beneficial for individuals and society as a whole, and I think you personally might find it rewarding to seek them out. And yes, to be honest, it’s rather frustrating to know that those movies probably won’t ever receive one-third of the audience of something like G. I. Joe: Retaliation. So I implore you once again: please, please go see movies like 12 Years A Slave and Inside Llewyn Davis. But if you go see Anchorman 2: The Legend Continues first, that’s okay, because it’s freaking hilarious.

Now just let me qualify that statement with a few caveats: (1) This is a Judd Apatow production, so even though he doesn’t direct the film, flourishes of his trademark crude humor still pop up unnecessarily here and there. Don’t bring the kids. (2) I saw this with an enthusiastic crowd whose laughter was infectious. For all I know, if you wait until you’re sitting at home alone in front of a TV to watch this, a lot of the jokes may fall flat. I’d suggest you try to see this with friends – but not with their kids. (3) This is not  cerebral humor. It's an Airplane style comedy movie in which they cram as many jokes as possible into every single frame. The gags come so rapid fire that, quite honestly, I can't remember a third of what I was even laughing at. Befitting Will Ferrell's roots at Saturday Night Live, Anchorman 2 basically functions as a two-hour long sketch comedy show, just with the same characters in each sketch. Don’t come looking for any deep story.

To be fair, though, there are scatterings of a plot amidst the pratfalls and punchlines. Anchorman 2 picks up right where the previous film left off, with Ron and his wife Veronica co-anchoring a news broadcast in New York City circa 1980. After the network decides to promote Veronica to the position of first female anchor on a national primetime newscast, Ron and his devoted news team are forced to disband and head back to San Diego. It isn’t long, though, before Ron is approached to participate in the startup of a never-before-heard-of venture: a 24 hour all-news network. Unconvinced the idea will work, but desperate to be back in an anchor's chair and to have a chance to reconnect with his estranged wife, Ron accepts the job and reassembles the team.