Restoring Faith in Fiction: A Visit with Walker Percy and Paul Elie 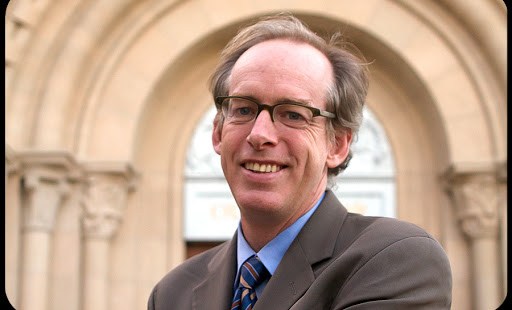 There is an indistinct moment of passage on the north-south corridor of U.S. Interstate 55 where the Midwest becomes the South—and it’s located somewhere in the lower middle half of the state of Missouri. It is a place that is no place, as the novelist Walker Percy might have put it; somewhere between the last scattering of hay bales, left where they fell from balers, basking in the mid-autumn sun, and the first maculation of cotton bolls bursting forth with pallid punctuation from their russet-rusted shrubs. It is a moment on the perpetual roll of asphalt ribbon where upland’s gentle roll exhausts itself into a certain undeniable flatness, a place where tasseled corn rows surrender to tow-headed cotton fields.

This past October, on my way to New Orleans I found this indistinct moment of North yielding to South. My brother-in-law and I were presenting at the second biennial Walker Percy Conference, Oct. 11-13, sponsored by Loyola University. For five years I had lived in Dallas—which has more in common with the Midwest than most people would care to admit—before settling in southwestern Wisconsin—which has more in common with the South than most people would care to notice. But this recent journey through Cotton Country was my first look at the South, at least by car and it shouldn’t have been a surprise that in making the trip I experienced the same sort of recognition-through-displacement common to many of Percy’s works.

The Walker Percy Conference was first launched in 2011 on the 50th anniversary of Percy’s debut novel The Moviegoer being published and winning the National Book Award. A cadre of like-minded Loyola University academicians and personal friends and associates of the late novelist organized the first conference at the school’s newly opened Walker Percy Center for Writing and Publishing. Now, two years later as an encore the organizers sponsored a conference on his 1983 work Lost in the Cosmos: The Last Self-Help Book.

Perhaps Percy’s most intriguing work, Lost in the Cosmos is a weird yet satisfying book – a hybrid of philosophical inquiry, satire, cultural analysis, multiple choice questions,  thought experiments and (“What the hell, why not?” you can hear Percy say) even fiction. Perhaps the book most closely resembles Melville’s own loose but not-so-baggy monster, Moby Dick. But Lost in the Cosmosstands well on its own. The quality and quantity of presenters at the conference attested to its enduring worth—with more than 40 papers covering everything from liturgy to pornography to interstellar exploration to mimetic theory to Marshall McLuhan.

For its challenge to the status quo of the modern milieu, Lost in the Cosmos stands as a whip-smart lion in the path for anyone seeking to understand the subjects which most crowded the late novelist’s mind—death, sex, sin, redemption, immanence, transcendence, man’s coarse and always transparent ways, and God’s sublime and often hidden ways. By analyzing and satirizing the self as alienated from itself, Percy draws an exact—and exacting—diagnosis of man’s place and purpose in the universe.

“The self becomes itself,” Percy writes, “by recognizing God as a spirit, creator of the Cosmos and therefore of one’s self as a creature, a wounded creature but a creature nonetheless, who shares with a community of like creatures the belief that God, who transcends the entire Cosmos and has actually entered human history—or will enter it—in order to redeem man from the catastrophe which has overtaken his self.”

Some have called Percy the last of the Southern novelists; others an American Dostoevsky. For editor and writer Paul Elie, Percy makes up one of a vital quadrumvirate of writers who have helped define the mid-20th century American literary experience and the Catholic contribution to American letters. The Life You Save May Be Your Own: An American Pilgrimage (2003) is a “group portrait,” as Elie says, of Percy, Flannery O’Connor, Thomas Merton, and Dorothy Day. Until 2012, he was senior editor at Farrar, Straus and Giroux, the publishing home for all four writers at some point in their career. Although his physical address is still located in New York City, Elie takes up intellectual residence at Georgetown University—where he holds a senior fellowship at the school’s Berkley Center for Religion, Peace, and World Affairs, where he is coordinating a partnership between Georgetown and the non-profit StoryCorps to gather, record and share with the public stories on religious belief in the lives of ordinary Americans. He also writes for his blog, “Everything that Rises” (everythingthatrises.com).

Because of his advantageous view from high atop the FSG eyrie, Elie is particularly well qualified—perhaps more so than any other writer of our day—to draw the portrait of this writing quartet. The critics seemed to think as much, too, because The Life You Save May Be Your Own was nominated for the National Book Critics Award soon after it was published. He was nominated again eight years later for Reinventing Bach (2012), which explores how technology has helped reimagine the way we listen to music.

By striking a harmonious balance of biography, history, theology, and literary analysis, Elie’s extensive volume on Percy, O’Connor, Merton, and Day provides a long (overdue) view of these four writers, their individual contributions to the 20th century literary and cultural context in which they wrote, and an apologia for their lasting impact in America and in the Church.