Wishing You a Vulgar Christmas 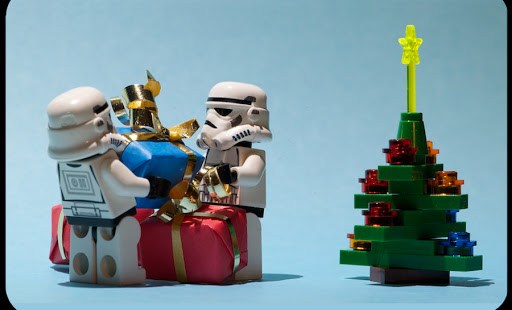 The highbrow approves of Christmas in general, and feasting in theory, and has a certain distant appreciation of historic festive rituals, but has a difficult time loosening his own collar and joining in.

This Christmas, some of us will again begin clucking our tongues and wagging our heads in disgust at the vulgar accouterments which have attached themselves to the Feast of the Nativity. Complaining about the excesses will become a favorite way to begin conversation in certain societies.  We will note that the window displays are even gaudier this year; we will remember when stores used to wait until after Thanksgiving to begin advertising; some might suggest putting Christ back in Christmas.  This caviling will be variously inspired; I can think of three.  First, the temperate person will think the feasting and drinking has gotten out of hand; second, highbrows will think it preferable to give a nod of approval to the idea behind the feast, but not slump into actual participation; and third, some puritans will object that the theology of the Christmas feast could be better preserved without pollution by pagan profanities.  However, on the basis of remarks Chesterton makes about Christmas, I’m inclined to believe that instead of joining any of these three types of nigglers, we would instead find him stringing the garland and basting the goose.

The temperate spirit strives for moderation, acting to avoid both want and excess; it therefore finds both the Christmas feast and the Lenten fast puzzling.  Chesterton believes such puzzlement might serve as an expansive stumbling block for that soul, so leaves the conundrum untouched.

“When the anxious ethical inquirer says, “Christmas is devoted to merry-making, to eating meat and drinking wine, and yet you encourage this pagan and materialistic enjoyment,” you or I will be tempted to say, “Quite right, my boy,” and leave it at that.  When he then says, looking even more worried, “Yet you admire men for fasting in caves and deserts and denying themselves ordinary pleasures; you are clearly committed, like the Buddhists, to the opposite or ascetic principle,” we shall be similarly inspired to say, “Quite correct, old bean,” or “Got it the first time, old top,” and merely propose an adjournment for convivial refreshment …” (
The Thing Why I am Catholic)

Chesterton makes no attempt to explain matters until the temperate mind has been sufficiently dilated to see that human well-being is served by both conditions.

The highbrow approves of Christmas in general, and feasting in theory, and has a certain distant appreciation of historic festive rituals, but has a difficult time loosening his own collar and joining in.  Chesterton was surrounded by such people in his day.  They liked to talk about the glories of ancient festivals, but…

“… there is about these people a haunting and alarming something which suggests that it is just possible that they don’t keep Christmas.  It is painful to regard human nature in such a light, but it seems somehow possible that Mr. George Moore does not wave his spoon and shout when the pudding is set alight.  It is even possible that Mr. W. B. Yeats never pulls crackers.  If so, where is the sense of all their dreams of festive traditions?  Here is a solid and ancient festive tradition still plying a roaring trade in the streets, and they think it vulgar.  If this be so, let them be very certain of this, that they are the kind of people who in the time of the maypole would have thought the maypole vulgar; who in the time of the Canterbury pilgrimage would have thought the Canterbury pilgrimage vulgar; who in the time of the Olympian games would have thought the Olympian games vulgar.  Nor can there be any reasonable doubt that they were vulgar …. Vulgarity there always was wherever there was joy, wherever there was faith in the gods …. If we ever get the English back on to the English land they will become again a religious people, if all goes well, a superstitious people.” (
Heretics)

To sophisticates, the word ‘vulgar’ means deficient in taste, delicacy, or refinement; marked by a lack of good breeding; boorish.  To Chesterton, the word means what it originally meant – belonging to the common people –  whose company he enjoyed very much.