The “Word Became Man Among Men” 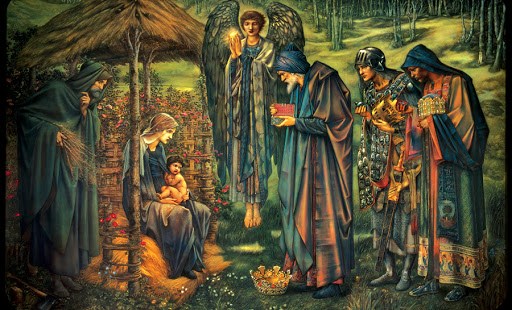 The Christmas story tells how three wise men (often shown in art as three kings) followed a star which guided them to the child Jesus. Here the star is represented as a light held in the hands of an angel.

In Christ, God was literally “fleshed out” for us – and that fact changes everything.

Aleteia is honored today to present this Christmas Eve meditation by Father James V. Schall, S. J., professor emeritus in the Department of Government at Georgetown University and one of the preeminent philosophers and defenders of Catholic culture of our time. Father Schall is the author, most recently, of Reasonable Pleasures: The Strange Coherences of Catholicism (Ignatius Press, 2103), and the forthcoming Remembering Belloc (St. Augustine’s Press 2014).

“There is one God, who by his word and wisdom created all things and set them in order. His Word is our Lord Jesus Christ, who in this last age became man among men to unite end and beginning, that is, man and God.”
–Saint Irenaeus, (d. 202 A.D.),
Against Heresies, 4:20.

Catholicism is a religion that concerns itself with understanding. We do not believe just because we believe. We believe on the basis of evidence, of argument, or of authority. We want to grasp the basis of what we know. We know that many arguments are illogical or unconvincing. We also hold some things to be true because other people witnessed an event and understood an argument.

Most of the things we take for granted every day are held because of the authority of someone else. If we want to know if our milk is safe to drink or our meat suitable to eat, we take the testimony of the inspectors, merchants, and farmers. Unless we have serious doubt about the quality of this particular bottle of milk or slice of meat, we go ahead unconcerned to drink or eat it. We don’t get sick. The authority was trustworthy. Authority itself, however, is always based on someone actually seeing the event or knowing the argument. Authority does not exist for authority’s sake.

Revelation also contains truths that describe reality. Some of these are more essential than others, but all relate to the central fact of our existence and how it came about. “How can we talk about God today?” Benedict XVII asked (Audience, November 28. 2012). “The first answer is that we can talk about God because he has talked to us; so the first condition for speaking of God is listening to what God himself has said…. God is therefore not a distant hypothesis concerning the world’s origin; he is not a mathematical intelligence who is far from us.” God wants us to know Him, ourselves, and the world, as we learn in Scripture.

But does not Scripture send us confusing messages? After all, many versions of Christianity exist, not all compatible with each other. We should not be overly surprised by the confusion that exists because of disunity among Christians about what it is they hold. We often “listen” to what God has to tell us, but we only “hear” what we want to put into our own lives.

The Church exists precisely to deal with this issue. It exists to make sure that what is basic, what is originally taught, remains the same, remains what is handed down. Aquinas tells us that the Word of God is out first teacher. We do not improve on its essence. Rather, in our humanity, we are, if we seek to understand and practice revelation, made more what we are. That is, when we deal with God’s revelation, we are not seeking to find something better than what God has revealed to us about what we are. When we “hear” what God wants us to be, we know that this is what is best for us.

We ourselves do not know fully what we are intended to be. We can figure out a few things. We are pretty sure we are meant to be happy, even when we are in fact not very happy. But this is still vague. We need to have it “fleshed out” more clearly. And in fact it was quite literally “fleshed out” as what we find in revelation. “The Word was made ‘flesh.’”

What does this odd way of speaking mean? As Irenaeus said, the end will be united in the beginning in us. What does this mean? All things are “set in order,” as Irenaeus put it. From the beginning we are created to live a life that is more than we can expect. We are to share in the inner life of the Godhead. This destiny would seem unlikely were it not for Christ’s being sent into the world. Word was made flesh. He who is God became, while remaining God, also man. When we understand this connection, we see, through the testimony of others, that knowing God is possible. Indeed, it is what the world is about. The Incarnation and Nativity are to be understood. God now has a voice to which we listen.