One Christmas, Under God 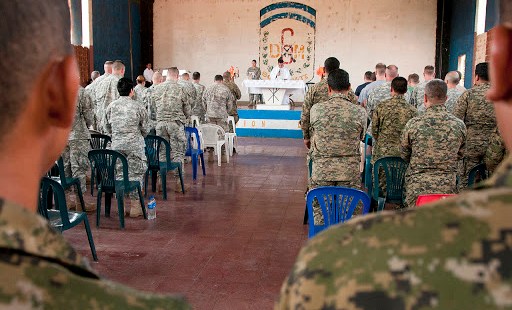 We each drink our own favorite drink and enjoy our own private family dinner, but at Mass we all fall on our knees and beg Our Lord to unite us in His innocence by the forgiveness of our sins.

I’ve spent the past two Christmas mornings alone, which has been very pleasant. I’ve enjoyed sleeping in, waking to a day of uninterrupted solitude (everyone else is gathered into compact and easily avoided groups), and sitting down to a good book. For me, what set the past two Christmas Days apart from the other 728 days was the quietude, the calm and the opportunity to allow myself a stiff drink a little earlier than usual.

Don’t be alarmed. There’s nothing horribly wrong with me, unless you consider it horribly wrong to be an introvert. I wasn’t miserable on those Christmas Days. On the contrary, I was quite comfortable. It takes a special effort for me to exit the Cartesian privacy of my mind and enter into large groups, and I prefer the company of one or two over the noisy crowd I know I’ll find at a Christmas Mass.

It isn’t likely that I’ll spend many more Christmases alone, and so this particular Holy Day will probably always pose something of a challenge to me. But I’ve discovered a secret: Christmas poses a challenge to us all. Whether you’re introverted, extraverted, old, young, single, married, widowed, clergy or lay, there’s no way for Christians to avoid the challenge of Christmas—a challenge to enter into the new Communion of Saints and face the God that creates and rules it.

Joseph Pieper writes: “The core and source of festivity itself remains inviolably present in the midst of society. This is as true today as it was a thousand years ago. It remains in the form of the praise given in ritual worship, which is literally performed at every hour of the day. By its nature that praise is a public act, a festival celebrated before the face of Creation, whether its site is a catacomb or a prisoner’s cell.”

While my natural introversion may hold me back from the usually noisome and crowded manifestations of Christmas festivity, the austerity of Christ’s Incarnation and the solemnity of silent worship is a stumbling block to all of us. While I love to sit quietly with a cat and a loved one, and others may wish to gather for hugs and chatter, we all must fall down, bowing equally low, and worship Christ, the Ultimate Interruption.

Christmas is not only a challenge, it is also an opportunity. In giving His only Son, God offers us an opening—an entrance into the unchanging and eternal realm of His Heavenly Presence, an exit from the chaotic world of contradictory personal preferences. Just as no one is exempt from the Judgment of God, so no one is excluded from the great Mercy that He offers in His Son.

Mankind is diverse, and our diversity shows itself on Christmas Day as much as at any other time. Each of us goes off to his or her own special family tradition. We each drink our own favorite drink and enjoy our own private family dinner, just like Mom used to make it. But at Liturgy we all fall on our knees and beg Our Lord to unite us in His innocence by the forgiveness of our sins. It is through repentance that we are united. By God’s salvific action and our participation in it.

On the Christmas morning, I’m meditating on the words of the great preacher St. John Chrysostom, who expresses well the mystery of the Incarnation. In closing, I’ll offer the conclusion of St. John’s homily on the Nativity:

"Behold Kings have come, that they might adore the heavenly King of glory;

"Soldiers, that they might serve the Leader of the Hosts of Heaven;

"Women, that they might adore Him Who was born of a woman so that He might change the pains of child-birth into joy;

"Virgins, to the Son of the Virgin, beholding with joy, that He Who is the Giver of milk, Who has decreed that the fountains of the breast pour forth in ready streams, receives from a Virgin Mother the food of infancy;

"Infants, that they may adore Him Who became a little child, so that out of the mouth of infants and sucklings, He might perfect praise;

"Children, to the Child Who raised up martyrs through the rage of Herod;

"Men, to Him Who became man, that He might heal the miseries of His servants;

"Shepherds, to the Good Shepherd Who has laid down His life for His sheep;

"Priests, to Him Who has become a High Priest according to the order of Melchisedech;

"Servants, to Him Who took upon Himself the form of a servant that He might bless our servitude with the reward of freedom;

"Publicans, to Him Who from amongst them named a chosen Evangelist;

"Sinful women, to Him Who exposed His feet to the tears of the repentant;

"And that I may embrace them all together, all sinners have come, that they may look upon the Lamb of God Who taketh away the sins of the world.

"Since therefore all rejoice, I too desire to rejoice. I too wish to share the choral dance, to celebrate the festival. But I take my part, not plucking the harp, not shaking the Thyrsian staff, not with the music of pipes, nor holding a torch, but holding in my arms the cradle of Christ. For this is all my hope, this my life, this my salvation, this my pipe, my harp. And bearing it I come, and having from its power received the gift of speech, I too, with the angels, sing: Glory to God in the Highest;
and with the shepherds: and on earth peace to men of good will."

May the Lord our God remember us all in His Kingdom on this Christmas Day and at all times, now and always and forever and ever. Merry Christmas!