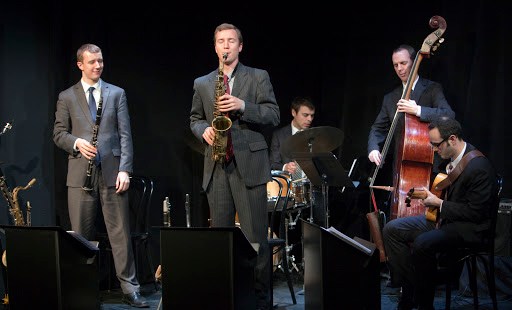 If it’s the French who saved jazz, it’s the American Anderson brothers who have captured those sentiments and preserved it as a part of our repertoire today.

“If it weren’t for France, jazz would be dead,” observed the great jazz trumpeter Quincy Jones. While jazz might be a quintessential American art form, it was the French that provided a home for jazz musicians to thrive. This is the story told in Le Jazz Hot: How the French Saved Jazz, a new ninety-minute musical revue playing off-Broadway at 59e59 Theatres in New York.

Complete with over fifteen jazz standards, such as “C’est Si Bon,” “Paris Blues,” and “Clair de Lune,” Le Jazz Hot chronicles the hits of jazz legends Sidney Bechet, Louis Armstrong, Duke Ellington, and Josephine Baker, among others. While America was plagued by racial tensions and class divides that hindered the popularity of these artists, the French proved to be a more welcoming audience and better financial patrons of jazz musicians, hence the massive wave of American jazz musicians to Paris in the early twentieth century.

At the helm of this production are twin brothers, Peter and Will Anderson, who impressively serve as writer and director, along with playing the saxophone, clarinet, and flute. They are supported by three other musicians on the guitar, bass, and drums, and together this five-piece ensemble masterfully transforms a small black box theatre into a Parisian café.

While the show is peppered with narration and documentary style film clips that provide the historical context for the show’s material, the primary vehicle for storytelling is its music.  And tell a story it does: a story of hope and optimism in a time of world turbulence and uncertainty that still uplifts the soul today.

At the performance I attended, I took great delight in the sheer joy this music brought those in attendance. As I scanned the room during the various numbers, I saw couples holding one another’s hands, kisses being exchanged, smiles shared with strangers, and an all around spirit of le joie de vivre competing with the music for space in the room.

The audience in attendance was a mix of young and old—seasoned music lovers and those being introduced to jazz for the first time.  The casual café style seating allows for a relaxed environment, in which audience members are encouraged to sip on a few drinks, enjoy small conversation, and participate in the very ambience of what makes jazz more than just a performance—it’s an experience.

Le Jazz Hot pays tribute to France for its contributions in ensuring that jazz was kept alive for future generations to enjoy. Yet if it’s the French who saved jazz, it’s the American Anderson brothers who have captured those sentiments and preserved it as a part of our repertoire today.

Le Jazz Hot: How the French Saved Jazz is currently running at 59e59 Theatres in New York City. Conceived, written, and directed by Peter and Will Anderson.