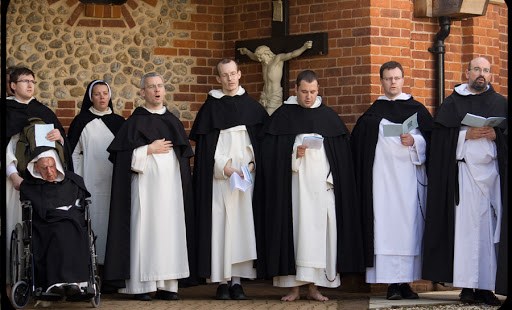 One observer described the scene as “very soothing to my spirit.”

Passers-by stopped for a moment to pause and listen in the busy streets of Washington, D.C., as Dominican brothers, sisters and friars gathered in joyful song to wish people a Merry Christmas.

One observer, John Cherry of Washington, D.C., described the scene as “very soothing to my spirit.”

He told CNA that religious brothers and sisters represent the “call of the future” of the Christian Church.

“The purpose of Jesus is to come and let the light shine in the darkness,” he continued, saying that the Dominicans’ singing offered a reminder of this in an often busy and sometimes difficult city.

Some of the friars, brothers and sisters also stopped to talk to the people walking by, praying with them, answering their questions about Catholicism and the meaning of Christmas, and handing out crucifixes blessed by Pope Francis.

Asdrubal Mencia, a D.C. resident and member of the Knights of Columbus at his local parish, said that while he had heard there were religious brothers and sisters in the city, this was his first time seeing them.

They have a “great tone,” he observed, but added that there was also a quality to their singing that he could not quite describe.

“It’s something joyful,” he said, a type of warmth. “I like it! It’s excellent.”

Bridget Boland and Branan Durbin – childhood friends who both attended a Dominican-run high school in Baltimore – explained that they had come specifically “to hang out with the Dominicans” during winter break at their colleges.

“It’s so cool to see them interact with everyone,” said Durbin, explaining that she loves to “see them talking to the little kids” and “out in the community.”

Boland added that the Dominicans offer a “really beautiful witness” and way of “teaching people about the Gospel.”

Br. Vincent Ferrer Bagan, O.P., who led the choir, explained that the brothers and sisters hoped to reach people by singing “songs of Christmas joy.”