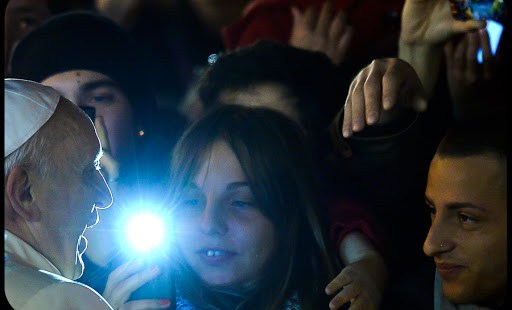 The elements that explain the “Francis effect.” Add yours to the list!

At the onset of 2013, no one would imagine that within the year, Pope Benedict XVI would announce his resignation and be succeeded by a Pope from the Americas, who would then be chosen Person of the Year by Time, as well as Facebook’s most popular topic that year.

In just over nine months, Cardinal Jorge Bergoglio – who at 76 was already thinking about his retirement (he flew to Rome for the conclave with a roundtrip ticket to and from Buenos Aires) – has become the most influential person on the planet.

A survey conducted in English and Spanish in the United States and published on December 11 by the Washington Post and ABC News, finds that the American public has never held a more positive view of the Catholic Church than now: 62% of the American Catholics have a favorable view of the Pope.

What did this Pope do to win the hearts of so many millions of people? Let’s review some of the most significant moments over the course of 2013 to help answer this question.

In the evening of March 13, the election of Pope Francis became one of the key global events of 2013, as documented by Twitter: the announcement of his election generated over 130,000 tweets per minute.

This unexpected Pope won the hearts of so many Catholics and non-Catholics alike in a matter of seconds with his chosen name (Francis, the "poverello" of Assisi), with the simplicity of his words (he began by saying, " good evening" – an unusual greeting from a Pope) and by his humility: before imparting his blessing, he asked that the people pray for his ministry.

The Pope has not won over hearts by what he has said or done, but rather by how he has done it. His style is the difference. It is a style fraught with gestures that one would not expect from the Bishop of Rome, but which are deeply tied to the essence of his ministry.

The day after his election, he personally for his lodging at the place where he had stayed in the days preceding the conclave. His decision to live in Casa Santa Marta has enabled him to maintain daily contact with pastors and faithful from all over the world. His phone calls to people who write for help have created a real relationship between the Bishop of Rome and his flock.

When washing the feet of a young Muslim woman in jail, he showed better than one could manage in a thousand words the meaning of interreligious dialogue on Holy Thursday. His ability to engage in an intense relationship in mere seconds with the sick, the young, the poor, the needy, and others who participate in the Wednesday general audiences makes every encounter a surprise.

People are touched, because they do not see a show in these gestures, but a man who lives what he says and says what he lives.

Precisely through these gestures, the public – and, in particular, the faithful – discover the true secret of Francis: he is a man of God. A man of God is not someone who is away from the world or who rejects it; rather, it is someone who lives among his brothers to become God’s warmth for them.

This dimension of Pope Francis is born from his prayer life. His mystical spirit was eloquently reflected on Good Friday, when he prostrated himself completely to worship the Cross of Christ.

Those who attend the daily morning Mass celebrated at his residence in Santa Marta see him as a "man of God." His homilies, which he delivers without the use of notes, becomes a source of daily meditation for the millions of people who read them online. Thus, unwittingly, Francis has become a mystic of the 21st century by way of social networks and colorful imagery – which, like and good Argentine, he uses to explain the deeper truths of faith and life.

The Pope’s pastoral agenda is one that is founded upon all these gestures and events. It was already synthesized by taking his name as pontiff. The Brazilian Franciscan Cardinal Claudio Hummes was with him during the election in the Sistine Chapel. "Do not forget the poor," he said. The name “Francis” spontaneously came to Jorge Bergoglio’s mind as the best way to carry out his message of evangelical poverty.

Humility led him to make an unusual decision: his first encyclical (the document in which Popes raise their pastoral program) was not on that he wrote by himself. Rather, he based it on an encyclical started by Pope Benedict – Lumen Fidei – which had been left unpublished.

And he surprised the world again by stating in detail the key points of the pastoral program of the future of his pontificate in the Apostolic Exhortation, Evangelii Gaudium. This document opens for the Church "a new stage of evangelization marked by joy."

Finally , it would not be possible to explain the "Francis effect" without mentioning his travels. He is traveling less than Benedict XVI and John Paul II, having made ​​three trips within Italy and only one abroad), but the impact has been very strong. His first trip, on July 8 , was to Lampedusa, an island off the Sicilian coast that collects the bodies of hundreds of people each year who have have taken to the sea from the African coast in an attempt to flee violence or simply in search of a better future.

But his pastoral style has been marked mainly by his visit to Brazil from July 22-29, 2013. According to Twitter, World Youth Day was one of the most closely followed events that month. The three million young people gathered in Copacabana realized that there is no better team they can possibly build together than when they are playing for God.

The Pontiff’s honeymoon with reporters seemed to last, as usual, about a hundred days. The press conference on the return flight from Brazil was their opportunity to entrap the new Pope, but the Pontiff’s responses were a flood of truths emerging from the heart. His statement about homosexuals became one of the most quoted phrases in Internet history: “If a person is gay and seeks the Lord and has good will, who am I to judge?"

The reporters were left dumbstruck. Bergoglio had overcome their pitfalls. He would end his sentences asking the questions that the reporters were too afraid to ask. His style has led the European Parliament to declare him "Communicator of the Year" – quite the paradox, if you consider that, during his flight to Brazil, the Pope explained well why does not normally grant interviews: "I really do not grant interviews, but it’s because I don’t know how; I can’t do it. It is not an easy thing for me.”

These are the five keys that , from my point of view , explain the "Francis effect." Surely, I have escaped major elements. You can write in the comment box elements that you think may be missing, or your own thoughts on Pope Francis.