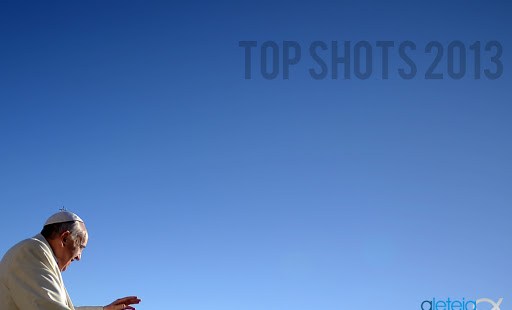 The Best Catholic moments of 2013

A lightning strikes St Peter's dome at the Vatican on February 11, 2013. Pope Benedict XVI announced today he will resign as leader of the world's 1.1 billion Catholics on February 28 because his age prevented him from carrying out his duties — an unprecedented move in the modern history of the Catholic Church.  AFP PHOTO / FILIPPO MONTEFORTE

The Cardinals exiting the high altar area at Saint Peters Basilica on there way to the Sistene Chapel in which they will close themselves in from the outside world until they chosen a new Pope. ALETEIA/JEFFREY BRUNO

White smoke billows from the smokestack announcing to the world that a new Pope has been elected in a conclusive vote. ALETEIA/JEFFREY BRUNO

This handout picture released by the Vatican press office on Match 29, 2013 show Pope Francis on ground during the Lord’s Passion on Good Friday at St Peter's basilica at the Vatican.  AFP PHOTO / OSSERVATORE ROMANO/HO

This handout picture released by the Vatican press office on March 28, 2013 shows Pope Francis (R) kissing the feet of a young offender after washing them during a mass at the church of the Casal del Marmo youth prison on the outskirts of Rome as part of Holy Thursday. Pope Francis washed the feet of 12 young offenders including two girls at a Rome prison on Thursday in an unprecedented version of an ancient Easter ritual seen as part of an effort by the new pope to bring the Catholic Church closer to the needy.  AFP PHOTO / OSSERVATORE ROMANO/HO

In this picture taken with a smartphone on Saturday, Sept. 7, 2013 and provided by NGO Fondazione L'Ancora ONLUS, Rev. Renzo Zocca, parish priest of Santa Lucia di Pescantina, in Verona, northern Italy, pats his Renault 4L as it is brought inside the Vatican to be donated to Pope Francis. Rev. Zocca, 70, told the Associated Press on Wednesday, Sept. 11, 2013, that he has dedicated his life to helping the needy on the outskirts of Verona, so when he saw that Pope Francis' priority was to reach out to the world's poor and inspire the Catholic leaders to go to slums and peripheries to preach, he decided to donate what he calls his 25-year-old "car of the French farmers" as a symbol of this approach. The pontiff invited Rev. Zocca for a private audience and on that occasion the priest had the car brought to the Vatican.  AP Photo/Fondazione L'Ancora ONLUS, ho

Pope Francis poses with youth in the Church of Saint Augustine in downtown Rome on August 28, 2013. The pontiff lead a celebration mass to mark the feast of Saint Augustine which falls on August 28th, the occasion also marks the opening of the Order’s 184th General Chapter. AFP PHOTO / OSSERVATORE ROMANO/ FRANCESCO SFORZA

In this photo provided by the Vatican newspaper L'Osservatore Romano on Tuesday, July 23, 2013, Pope Francis steps out of the plane, whose pilots are waving both the Vatican flag, left, and the Brazilian flag, upon landing in Rio de Janeiro, in Brazil, from Rome, Monday, July 22, 2013. Pope Francis landed Monday in a Brazil electric with anticipation for the pontiff's first international trip. The pope is coming to meet with legions of young Roman Catholics converging on Rio for the church's World Youth Day festival. AP Photo/L'Osservatore Romano, ho

Picture of a Catholic pilgrim attending World Youth Day (WYD) taken as he waits for the arrival of Pope Francis for a prayer vigil at Copacabana beach in Rio de Janeiro, on July 27, 2013. In a speech to Brazil's political, religious and civil society leaders earlier, Pope Francis said a "constructive dialogue" was needed to confront the country's social turmoil, referring to the massive street protests that rocked Brazil last month to demand an end to corruption and better public services. AFP PHOTO / YASUYOSHI CHIBA

Hundreds of thousands of people crowd Copacabana beach in Rio de Janeiro on July 28, 2013 waiting for the arrival of Pope Francis for the final mass of his visit to Brazil. Throngs of pilgrims attending World Youth Day (WYD) spent the night sleeping on the beach before Sunday's final mass, while the city's mayor said he expects up to three million people to pack the beach for the occasion.

Bishops pray during the pontif's weekly general audience on January 9, 2013 at the Paul VI hall at the Vatican. AFP PHOTO / VINCENZO PINTO

Chinese Catholic choir girls hold candles during an Easter service at the Cathedral of the Immaculate Conception in Beijing on March 30, 2013. Experts estimate that there are as many as 12 million Catholics in China, with about half in congregations under the officially-administered Chinese Catholic Patriotic Association. The rest belong to non-sanctioned or so-called underground churches. AFP PHOTO/Mark RALSTON

Penitents of the 'La Paz' brotherhood take part in a procession in Sevilla during the Holy Week on March 24, 2013. Christian believers around the world mark the Holy Week of Easter in celebration of the crucifixion and resurrection of Jesus Christ. AFP PHOTO/ CRISTINA QUICLER

A woman wearing the traditional Mantilla walks under the Macarena arch during the Holy Week in Sevilla on March 28, 2013. Christian believers around the world mark the Holy Week of Easter in celebration of the crucifixion and resurrection of Jesus Christ. AFP PHOTO/ CRISTINA QUICLER

A boy is carried in a polystyrene box as thousands of city slum dwellers take an Easter Sunday dip on the polluted Manila Bay to beat the scorching heat on March 31, 2013. The city government bars swimming in the bay due to health hazards, but authorities are often helpless in implementing the ordinance. AFP PHOTO/NOEL CELIS

Cuban pilgrims head to St. Lazarus church in El Rincon, 25 km from Havana, on December 17, 2013, while celebrating one of the island's most important religious rites, the pilgrimage to pay homage to Saint Lazarus. AFP PHOTO/Yamil LAGE

A sea of Catholic devotees touch the rope used to pull the carriage carrying the life-size statue of the Black Nazarene (not pictured) during an annual procession in honor of the centuries-old icon of Jesus Christ in Manila on January 9, 2013. Masses of Catholic devotees swept through the Philippine capital on January 9, in a spectacular outpouring of passion for a centuries-old icon of Jesus Christ that many believe can perform miracles. AFP PHOTO/NOEL CELIS

A child drinks from a bucket in the catholic youth centre Don Bosco in Bangui on December 14, 2013, where thousands of internally displaced people (IDPs), including hundreds of children, live, according to calculations undertaken by UNICEF. More than 600 people have been killed and 159,000 displaced in sectarian violence that has ravaged the Central African Republic in the past week, the UN's refugee agency said on December 13. AFP PHOTO/ SIA KAMBOU

Roman Catholic Christians are pictured in front of a stained glass window depicting former South African President Nelson Mandela at Regina Mundi church in Soweto on March 31, 2013. Mandela is spending his fourth day in hospital after making "steady progress" for a recurring lung infection. The 94 year old is idolised in his home nation. It is the second time within a month that he has been admitted to hospital, after spending a night for check-ups on March 9, 2013. AFP PHOTO/Carl de Souza

A Catholic priest holds a flag among supporters of the anti-gay marriage movement "La Manif Pour Tous" (Demonstration for all) as they protest on May 5, 2013 in Paris. After months of acrimonious debate and hundreds of protests that have occasionally spilled over into violence, France's National Assembly approved on April 23, 2013 a bill making the country the 14th to legalise same-sex marriage. AFP PHOTO / LOIC VENANCE

The body of Dutch former Roman Catholic bishop of Roermond and of the Diocese of Reykjavik, Jo Gijsen, placed up on a bier in a monastry in Sittard on June 26, 2013. Gijsen died on June 24, aged 80.

A homeless man gets into a van to be rehabilitated by the "Missao Belem" Catholic church and the State Department of Social Development in "Crackolandia", a place where addicts gather to smoke crack, in downtown Sao Paulo, Brazil, on January 21, 2013. AFP PHOTO/Yasuyoshi CHIBA

A cheesemaker monk flips around "Abbaye de Tamie" cheese wheels stored in a cellar of the Tamie Abbey (Notre-Dame-de-Tamie in French) on July 8, 2013 in Plancherine, in the French Savoie region. The abbey, founded in 1132, is occupied by a trappist community of cheesemaker monks who produce the "Abbaye de Tamie" cheese. AFP PHOTO / JEAN PIERRE CLATOT

This handout picture released by the Vatican press office on December 3, 2013 shows a room of the Vatican library (Biblioteca Apostolica Vaticana). The Bodleian Libraries of the University of Oxford and the Biblioteca Apostolica Vaticana (Vatican Library) have joined efforts in a landmark digitization project with the aim of opening up their repositories of ancient texts. Over the course of the next four years, 1.5 million pages from their remarkable collections will be made freely available online to researchers and to the general public.The website launched on December 3, 2013 with funding from the Polonsky Foundation includes the first results of the four-year project, including the Bodleian's 1455 Gutenberg Bible, one of only 50 surviving copies of the first major book printed in the west with metal type. AFP PHOTO / BIBLIOTECA APOSTOLICA VATICANA

A nun dressed as a clown waits for the Pope outside the St. Francis Hospital in Rio de Janeiro, Brazil, on July 24, 2013. Pope Francis warned Catholics on Wednesday against "ephemeral idols" like money at his first public mass in his native Latin America as huge crowds lined the streets to cheer him. The first Latin American and Jesuit pontiff visited Aparecida to lead his first big mass since arriving in the country for a week-long visit of which highlight is the huge five-day Catholic gathering World Youth Day. AFP PHOTO – POOL – LUCA ZENNARO