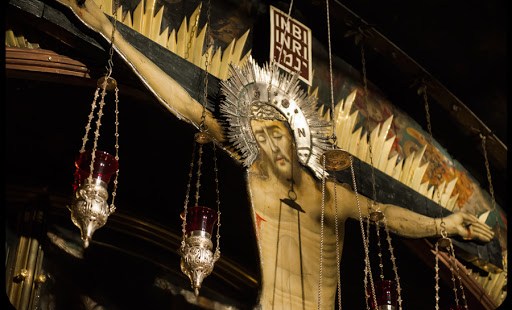 The Pope explained that the “principal goal” of the trip is “to commemorate the historic meeting between Pope Paul VI and the Patriarch Athenagoras I, that occurred precisely on January 5, as today, 50 years ago.”

Pope Francis has announced that he will make a pilgrimage to the Holy Land this coming May to mark a key moment in Catholic and Orthodox Christian relations.

“In this atmosphere of joy, typical of this Christmas time, I wish to announce that from 24 to 26 (of) next May, God willing, I will carry out a pilgrimage in the Holy Land,” he said after the Jan. 5 Sunday Angelus to the crowds filling St. Peter’s Square.

Pope Francis will meet with the Orthodox Patriarch of Constantinople, Bartholomew I, during his May pilgrimage. Along with representatives of “all the Christian churches of Jerusalem,” the two leaders will celebrate an ecumenical meeting at the site of the Holy Sepulchre, which Christians revere as the place of Jesus’ burial prior to the Resurrection.

The Pope explained that the “principal goal” of the trip is “to commemorate the historic meeting between Pope Paul VI and the Patriarch Athenagoras I, that occurred precisely on January 5, as today, 50 years ago.”

In January of 1964, Pope Paul VI traveled to the Holy Land. He met with the Ecumenical Patriarch of Constantinople on the Mount of Olives on January 5.

This historic meeting led to an improved relationship between the Catholic and Orthodox Churches, including a momentous joint declaration issued in 1965. In that declaration both leaders expressed their desire “to overcome their differences in order to be again ‘one’ as the Lord Jesus asked of his Father for them.”

The Joint Catholic-Orthodox Declaration of His Holiness Pope Paul VI and the Ecumenical Patriarch Athenagoras I lifted the centuries-long excommunications levied by the leaders of both Churches against each other in 1054. The excommunications helped finalize the schism between the major Churches of Eastern and Western Christianity.

In addition to Jerusalem, the Pope will also travel to Bethlehem and Amman, Jordan.

Patriarch Bartholomew I came to Rome for Pope Francis’s installation Mass in March 2013. During that visit, he asked the Pope to visit the Holy Land.

Pope Francis concluded his announcement with a request for spiritual support.

“Right now, I ask you to pray for this pilgrimage, which will be a pilgrimage of prayer,” he said.