Theatre Review: Natasha, Pierre, and the Great Comet of 1812 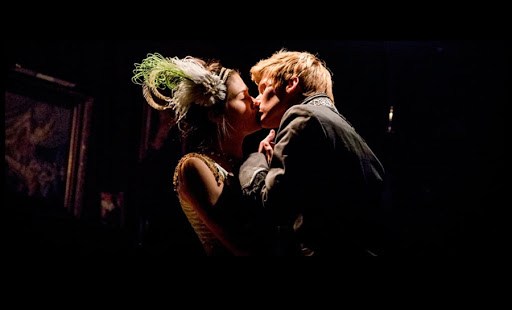 A marvelously inventive work comes to the New York stage.

Stepping inside the big tent, which is home to the off-Broadway musical Natasha, Pierre, and the Great Comet of 1812, one might be tempted to think that they are about to enter a circus. While the show is action-packed, rowdy, and at times overwhelming to the senses, it’s no circus – it’s a bona fide musical that some would argue represents the future of the industry.

Gone are the rows of chairs, the proscenium, the orchestra pit, and the stage. Inside Kazino, the name of this makeshift theatre home, the cast and orchestra members perform around audience members, who sit at café style tables, drink vodka, and eat borscht while enjoying the evening’s performance.

The tale they tell is a familiar one to those steeped in Russian literature, but the telling is not. Based on volume two, part five of Tolstoy’s epic War and Peace, The Great Comet translates the classic tale into a rock opera. “There’s a war going on out there somewhere, and Andrey isn’t here,” sings Pierre in the opening lines of The Great Comet. It’s a simple plot line that is the basis of this rather ordinary tale that is quickly complicated by human folly (and the general confusion that is a staple of any piece of Russian literature).

Pierre is a wealthy aristocrat who spends his days in and out of sobriety reading philosophy and trying to survive his own existential crisis while being married to the unfaithful Helene. We then meet the young and beautiful Natasha, who is engaged to be married to Andrey, who is off to war. While Andrey is away, Natasha is seduced and almost abducted by the ever-charming womanizer, Anatole (who also happens to be secretly married). While this love triangle, along with the other woes of war and family drama, complicate life for these characters, by show’s end, they’ve at least provided a temporary solution to Pierre’s existential crisis as he is given purpose — and hope — for his own future.

From the show’s outset, the telling and its method is tongue-and-cheek, with the audience encouraged to join in the fun. Consider some of these lyrics from the opening song: “It’s a complicated Russian novel. Everyone’s got nine Russian names, so look it up in your program. We appreciate it, thanks a lot.” But just to keep things straight, the cast assigns single descriptive words to each character in hopes of aiding the story telling along:  “Helene is a slut, Anatole is hot, Natasha is young, and Andrey isn’t here.” Crude? Maybe a bit. Clever? Absolutely.

This is very much an ensemble piece of theatre, and this seventeen-member cast delivers a wildly entertaining — not to mention, expertly performed — new work of theatre by David Malloy (composer, librettist, and orchestrator all in one). While the lyrics are unconventional and forgo simple rhymes and repeats, Malloy captures the essence of Tolstoy’s literary genius while adding his own touch of musical imagination to the mix.