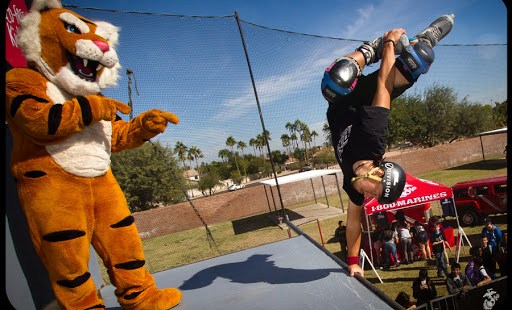 If traditional sports are too mainstream for you, here are some sports you can get into before they are cool.

Football is boring. Basketball is lame. Baseball may be one of the worst sports ever conceived. What else is there? Golf??

If you’ve had similar thoughts, do not despair! There is a whole wide world of other sports that are just waiting for the big time. Here are the top nine most totally ridiculous sports you’ve never heard of – until now.

This sounds like a recipe for body image issues, but after watching the video, it actually looks fun!

You run with a ladder, lean it up against a wall, then climb the ladder. If that sounds easy, watch the professionals.

Wrestling is cool, but it’s been done. Wrestling underwater – now that’s interesting! Created in Soviet Russia in the 1980s, each person has a ribbon attached to their foot and the goal is to retrieve your opponent’s ribbon.

Ever think about swinging so high on a swing set that you’d flip around the top bar? Now you can! Invented in Estonia in the ‘90s, I wonder how long it will be before I can get one of these in the U.S.

A normal person sees big mountains of sand as pretty much useless. An awesome person sees it as an opportunity for death defying competitions.

This is like underwater wrestling, except that it’s rugby, a sport that already has a ton of cred for being so intense.

Now this truly is just ridiculous. You play chess, you box, you go back to the chess, etc. It has the side benefit of making boxers look smart and chess players cool.

The most important thing you need to know about Bo-taoshi is that it’s from Japan. At least as it often appears in the media that makes its way to Americans on the Internet, the Japanese seem to like their games fun and extremely outrageous. Bo-taoshi doesn’t disappoint, and it makes football look like a game for wimps.

Yes, this is the third underwater sport on the list, but this is no question, hands down the most insane sport I’ve ever seen. It’s exactly what it’s sounds like – underwater ice hockey – with one addition, it’s played upside down on the bottom side of the ice.

Of course, there’s lots of crazy sports out there. What did I miss?

Brantly Millegan is an Assistant Editor for Aleteia. He is also Co-Founder and Co-Editor of Second Nature, Co-Director of the International Institute for the Study of Technology and Christianity, and is working on a M.A. in Theology at the St. Paul Seminary School of Divinity. He lives with his wife and three children in South St. Paul, MN. His personal website is brantlymillegan.com.