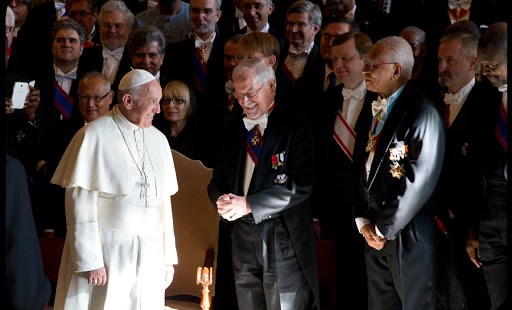 Francis said his choices “represent the deep ecclesial relationship between the Church of Rome and the other Churches throughout the world.”

Today Pope Francis announced the names of the 19 men from various parts of the globe who will be appointed cardinals in February.

In the surprise announcement at the end of his Sunday Angelus, Pope Francis noted that the new Cardinals come “from 12 countries from every part of the world,” and “represent the deep ecclesial relationship between the Church of Rome and the other Churches throughout the world.”

The geographical distribution entails eight cardinals from Europe; seven from the Americas; and two from both Africa and Asia. No cardinals from the United States were named.

Besides some expected names, such as Archbishops Pietro Parolin, Secretary of State; Lorenzo Baldisseri, general secretary of the Synod of Bishops, Gerhard Mueller, prefect of the Congregation for the Doctrine of the Faith; and Beniamino Stella, prefect of the Congregation for Clergy, the list includes several men from the far reaches of the globe.

Archbishop of Ouagadougou, Philippe Nakellentuba Ouedraogo, will join the College of Cardinals from Burkina Faso in west Africa, as will Bishop Chibly Langlois of Les Cayes, Haiti: both will be the only Cardinals from their countries.

Fr. Federico Lombardi of the Holy See’s Press Office noted that the Pope’s choice of these two men especially “shows concern for people struck by poverty.”

Three new Cardinals from Pope Francis’ own South America are on the list, including the current Archbishop of Buenos Aires, Mario Aurelio Poli, who replaced the then- Jorge Cardinal Bergoglio when he was elected Pope last spring.

The Pontiff also named Cistercian Archbishop Orani Joao Tempesta of Rio de Janeiro, Brazil, who hosted Pope Francis for his first World Youth Day in July of 2013.  When Archbishop Tempesta’s name was read, Pope Francis looked up to acknowledge the cheers coming from St. Peter’s Square.  “There are a lot of Brazilians here, eh?” he said.

Three of the 19 men named are over the age of 80 and will be therefore ineligible to vote in the next papal election: Archbishop Loris Francesco Capovilla, Archbishop Fernando Sebastian Aguilar, and Archbishop Kelvin Edward Felix.

Archbishop Capovilla served as the secretary of Pope John XXIII, who will be canonized in April.

The official appointments will be made on February 22, the feast of the Chair of St. Peter.  On Feb. 20-21, Pope Francis announced that he will hold a consistory with all the Cardinals in order to reflect on the theme of the family.

He then concluded by asking for prayers for the new Cardinals: “Let us pray for the new Cardinals, that clothed with the virtues and sentiments of the Lord Jesus, (the) Good Shepherd, they can more effectively help the Bishop of Rome in his service to the universal Church,” said Pope Francis.